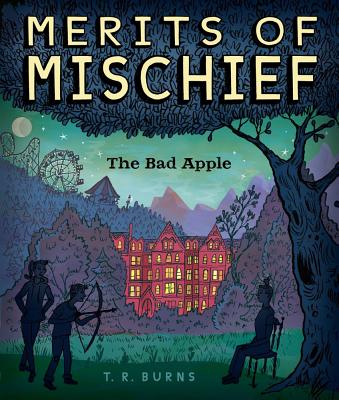 This is book number 1 in the Merits of Mischief series.

The start of a mischievous new middle-grade series has trouble written all over it.

Twelve-year-old Seamus Hinkle is a good kid with a perfect school record—until the day he accidently kills his substitute teacher with an apple.
Seamus is immediately shipped off to a detention facility—only to discover that Kilter Academy is actually a school to mold future Troublemakers, where demerits are awarded as a prize for bad behavior and each student is tasked to pull various pranks on their teachers in order to excel. Initially determined to avoid any more mishaps, Seamus nonetheless inadvertently emerges as a uniquely skilled troublemaker. Together with new friends Lemon and Elinor, he rises to the top of his class while beginning to discover that Kilter Academy has some major secrets and surprises in store….

T. R. Burns sometimes writes as Tricia Rayburn. Or does Tricia Rayburn sometimes write as T. R. Burns? You may never know the answer to that, but you can know that this tattler of tales has tattled plenty for tweens and teens. In the small New York town she calls home, it’s the best way to keep idle hands busy—and out of trouble.

T.R. Burns. S&S/Aladdin, $16.99 (352p) ISBN 978-1-4424-4029-6
In this auspicious first entry in the Merits of Mischief series, 12-year-old Seamus Hinkle is sent to the Kilter Academy for Troubled Youth after he accidentally kills his substitute teacher, Miss Parsippany, with an apple. Upon his arrival, however, Seamus discovers that Kilter is actually a school for professional troublemakers: demerits are awarded for bad behavior, gold stars are looked down on, and students use the skills they’ve learned to trick their teachers. Despite his best efforts (and lingering guilt over the death of Miss Parsippany), Seamus appears to be a natural-born troublemaker. Burns (aka author Tricia Rayburn) has hold of a fantastic premise—what’s not to like about a school where pranks and destruction are encouraged and an arsenal of troublemaking devices are available for purchase? It’s easy to get drawn into this fast-paced, funny, and entertaining adventure, filled with sympathetic, eccentric, and mischievously talented characters. At its heart, it’s a story about the importance of individuality and being a good friend, and a last-minute twist will leave readers hungry for the next book. Ages 8–12.

Twelve-year-old Seamus has never been in trouble at school, and he certainly never meant to kill his
substitute teacher. But after beaning her with an apple in the middle-school cafeteria, he is sent to Kilter
Academy. Despite outward appearances, Kilter is not your typical reform school but an institution bent on
turning out “Professional Troublemakers.” Seamus has a hard time fitting in, but he quickly grasps the
system (demerits are good, gold stars are bad) and earns praise from the enigmatic headmistress. Although both plot and characterization strain credibility at times, this is still an entertaining, anything-butpredictable chapter book. The plot twists, turns, and contorts, keeping readers as mystified as Seamus about his ever-changing predicaments and the meaning of it all. Not your typical boarding-school story (where else is the protagonist’s roommate a sleepwalking pyromaniac?), this book will amuse many readers, and the surprise ending may create demand for the next volume in the Merits of Mischief series.