The Testament of Mary (CD-Audio) 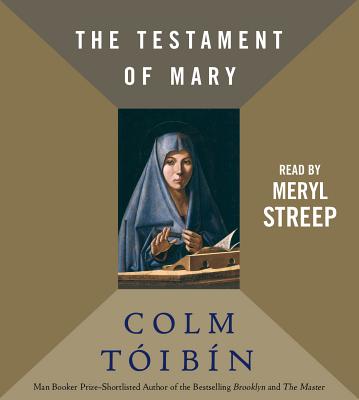 By Colm Toibin, Meryl Streep (Read by)
$14.99
Availability to be confirmed

2014 Audie Award Finalist for Audiobook of the Year, Literary Fiction, and Solo Narration—Female!

“Tóibín is at his lyrical best in this beautiful and daring work” (The New York Times Book Review) that portrays Mary as a solitary older woman still seeking to understand the events that become the narrative of the New Testament and the foundation of Christianity—shortlisted for the 2013 Man Booker Prize.

In the ancient town of Ephesus, Mary lives alone, years after her son’s crucifixion. She has no interest in collaborating with the authors of the Gospel, who are her keepers. She does not agree that her son is the Son of God; nor that his death was “worth it”; nor that the “group of misfits he gathered around him, men who could not look a woman in the eye,” were holy disciples.

Mary judges herself ruthlessly (she did not stay at the foot of the cross until her son died—she fled, to save herself), and her judgment of others is equally harsh. This woman whom we know from centuries of paintings and scripture as the docile, loving, silent, long-suffering, obedient, worshipful mother of Christ becomes a tragic heroine with the relentless eloquence of Electra or Medea or Antigone. Tóibín’s tour de force of imagination and language is a portrait so vivid and convincing that our image of Mary will be forever transformed.

Colm Tóibín is the author of ten novels, including The Master, winner of the Los Angeles Times Book Prize; Brooklyn, winner of the Costa Book Award; The Testament of Mary; and Nora Webster, as well as two story collections and several books of criticism. He is the Irene and Sidney B. Silverman Professor of the Humanities at Columbia University. Three times shortlisted for the Booker Prize, Tóibín lives in Dublin and New York.