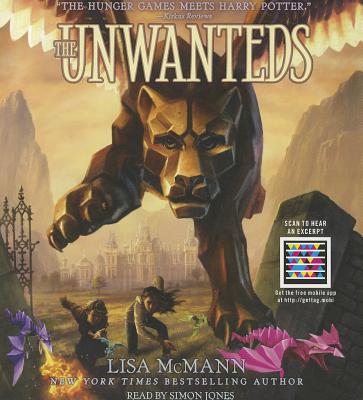 By Lisa McMann, Simon Jones (Read by)
$29.99
Availability to be confirmed

Every year in Quill, thirteen-year-olds are sorted into categories: the strong, intelligent Wanteds go to university, and the artistic Unwanteds are sent to their deaths.

Thirteen-year-old Alex tries his hardest to be stoic when his fate is announced as Unwanted, even while leaving behind his twin, Aaron, a Wanted. Upon arrival at the destination where he expected to be eliminated, however, Alex discovers a stunning secret--behind the mirage of the "death farm" there is instead a place called Artime.

In Artime, each child is taught to cultivate their creative abilities and learn how to use them magically, weaving spells through paintbrushes and musical instruments. Everything Alex has ever known changes before his eyes, and it's a wondrous transformation.

But it's a rare, unique occurence for twins to be separated between Wanted and Unwanted, and as Alex and Aaron's bond stretches across their separation, a threat arises for the survival of Artime that will pit brother against brother in an ultimate, magical battle.

The Hunger Games meets Harry Potter in this middle-grade departure from McMann’s string of paranormal mysteries with romance for young adults.

On the day of Purge in totalitarian Quill, which is run by the High Priest Justine, 13-year-olds learn if they are deemed Wanted to attend the university, Necessary to tend the land or Unwanted and purged by execution. Without a good-bye from his Wanted identical brother Aaron, Alex Stowe and the other Unwanteds travel to the Death Farm. Instead of death, they meet the lush and magical world of Artimè, kept secret from Justine by mage Marcus Today. In a third-person narration characterized by even pacing and whimsical inventions, Alex and his peers learn that their creativity threatened Justine’s power. Surrounded by talking blackboards, transporting tubes and such fantastical creatures as an octagator (with the head of an alligator and body of an octopus) for instructors, the teens hone their drawing, music and acting skills while also wielding paintbrushes for invisibility spells and iambic pentameter to stun attackers during Magical Warrior Training, in preparation for battle against the Quillitary. As the youths explore fear, responsibility and free thinking, their spells may be used sooner than they think when Alex’s twin bond is tested and rivals vie for Aaron’s new position in Justine’s government.

Blending elements from two popular genres, this is sure to be a double hit. - KIRKUS, April 15, 2011

"Reading Lisa McMann's THE UNWANTEDS was like discovering a brilliant,

lost children's classic—except it's never going to be lost, because

readers will never, ever forget the magic they'll experience in

--James A. Owen, author and Illustrator of HERE, THERE BE DRAGONS