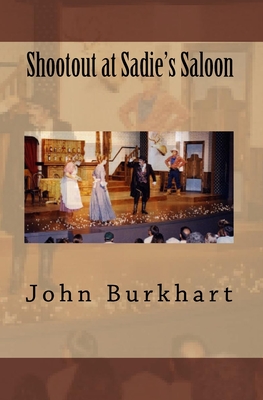 A two-act melodrama about the old west and the evils of alcohol. It seems everybody in town wants Sadie Spencer and her sister Sally to get rid of their late father's saloon. Temperance movement stalwarts Hazel Hoochater and Prudence Purewater are determined to close the saloon down, and notorious gambler Dirk Devious has plans to obtain control of the saloon by fair means or foul. Sadie's sweetheart Clint Cactus wants Sadie to sell the saloon and marry him. Will Dirk succeed in his evil plans? Or will he and Clint have a....Shootout at Sadie's saloon.

Mr. Burkhart served From 1993 to 2006 as Producer/Director at the Denman and Mary Mallory Kountze Memorial Theatre located at the Eugene T. Mahoney State Park in Nebraska. Mr. Burkhart has written, produced, directed and acted in numerous melodramas at the park for the past sixteen years. He has also acted, directed and served on many area theatre boards. His plays have been performed in many theatres worldwide. He also has been commissioned to write melodramas for local towns celebrating their centennials or bicentennials.