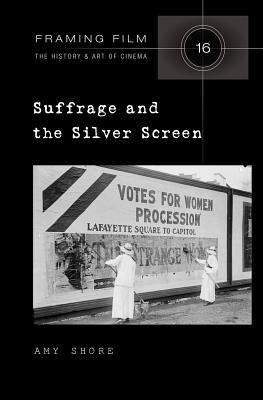 This is book number 16 in the Framing Film series.

In the 1910s, the American woman suffrage movement became a modern mass movement by using visual culture to transform consciousness and gain adherents. As part of this transformation, suffrage organizations produced several films and related cinematic projects, including four full-length, nationally distributed feature productions. This activist use was one of the first instances in the United States that a social movement recognized and harnessed the power of cinema to transform consciousness and, in turn, the social order. Suffrage and the Silver Screen discusses how the suffrage movement accomplished this formidable goal through analysis of the local and national uses of cinema by the movement. Amy Shore argues that these works must be considered as part of a political filmmaking tradition among feminists. The book contextualizes the films within the politics and practices of the suffrage organizations that produced them in order to understand and assess the strategic role of these films. By examining these works, the history of both suffrage and cinema is necessarily reconsidered and expanded. Suffrage and the Silver Screen is an essential resource for those studying early cinema, women and cinema, the woman suffrage movement, and the use of visual media in social movements.
Amy Shore is Director and Associate Professor in the Cinema & Screen Studies Program at the State University of New York at Oswego. Shore holds a PhD in cinema studies from New York University and a BA in Spanish literature from the University of Delaware. Her research on media and social movements has been published in Camera Obscura and Afterimage as well as in a 2010 collection of essays that re-examines the relationship between feminism, history, and feminist theory in film.