The After Party (Large Print / Paperback) 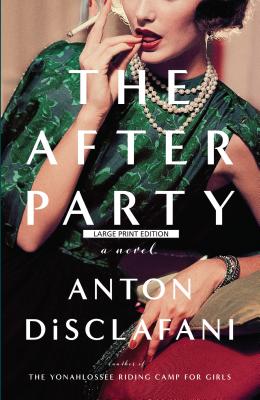 By Anton DiSclafani
$16.00
Availability to be confirmed

"A vintage version of 'Gossip Girl' meets bigger hair." --The Skimm
"DiSclafani's story sparkles like the jumbo diamonds her characters wear to one-up each other. Historical fiction lovers will linger over every lush detail." --People
One of the Best New Books for Summer 2016 - Good Housekeeping
One of the 3 Beach Reads You Won't Be Able to Put Down - O Magazine


From the bestselling author of The Yonahlossee Riding Camp for Girls comes a story of lifelong female friendship - in all its intimate agony and joy - set within a world of wealth, beauty, and expectation.
Joan Fortier is the epitome of Texas glamour and the center of the 1950s Houston social scene. Tall, blonde, beautiful, and strong, she dominates the room and the gossip columns. Every man wants her; every woman wants to be her. Devoted to Joan since childhood, Cece Buchanan is either her chaperone or her partner in crime, depending on whom you ask. But when Joan's radical behavior escalates the summer they are twenty-five, Cece considers it her responsibility to bring her back to the fold, ultimately forcing one provocative choice to appear the only one there is.
A thrilling glimpse into the sphere of the rich and beautiful at a memorable moment in history, The After Party unfurls a story of friendship as obsessive, euphoric, consuming, and complicated as any romance.

Anton DiSclafani is the author of the nationally bestselling novel, The Yonahlossee Riding Camp for Girls. She was raised in northern Florida. From the Hardcover edition.