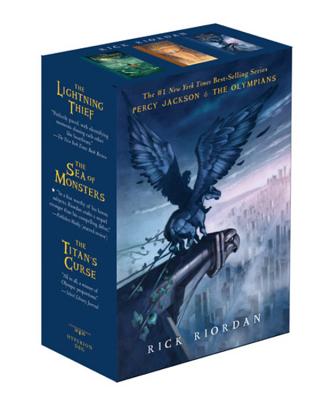 Humans and half-bloods agree—Percy Jackson and the Olympians is a series fit for heroes! Relive the adventure from the beginning with this boxed set of the first three books with glorious new cover art by John Rocco. The Lightning Thief
Percy Jackson is a good kid, but he can’t seem to focus on his schoolwork or control his temper. When his mom tells him the truth about where he came from, she takes him to the one place he’ll be safe—Camp Half-Blood, a summer camp for demigods (on Long Island). There, Percy learns that the father he never knew is actually Poseidon, God of the Sea. Soon Percy finds himself caught up in a mystery that could lead to disastrous consequences. Together with his friends—a satyr and other the demigod daughter of Athena—Percy sets out on a quest to reach the gates of the Underworld (located in a recording studio in Hollywood) and prevent a catastrophic war between the gods.

The Sea of Monsters
After a summer spent trying to prevent a catastrophic war among the Greek gods, Percy Jackson finds his seventh-grade school year unnervingly calm. But things don’t stay quiet for long. Percy soon discovers there is trouble at Camp Half-Blood: the magical borders which protect Half-Blood Hill have been poisoned by a mysterious enemy, and the only safe haven for demigods is on the verge of being overrun by mythological monsters. To save the camp, Percy needs the help of his best friend, Grover, who has been taken prisoner by the Cyclops Polyphemus on an island somewhere in the Sea of Monsters—the dangerous waters Greek heroes have sailed for millennia—only today, the Sea of Monsters goes by a new nameL: the Bermuda Triangle. Now Percy and his friends must retrieve the Golden Fleece from the Island of the Cyclopes by the end of the summer or Camp Half-Blood will be destroyed. But first, Percy will learn a stunning new secret about his family—one that makes him question whether being claimed as Poseidon’s son is an honor or simply a cruel joke...

The Titan’s Curse
When Percy Jackson receives a distress call from his friend Grover, he immediately prepares for battle. He knows he'll need his powerful demigod allies, Annabeth and Thalia, at his side; his trusty broze sword Riptide; and... a ride from his mom. The demigods race to the rescue, to find that Grover has made an important discovery: two new powerful half-bloods whose parentage is unknown. But that's not all that awaits them. The Titan lord, Kronos, has set up his most devious trap yet, and the young heroes have unwittingly fallen prey. Hilarious and action-packed, this third adventure in the series finds Percy faced with his most dangerous challenge so far: the chilling prophecy of the Titan's curse.

Rick Riordan (www.rickriordan.com) is the author of the # 1 New York Times best-selling Percy Jackson and the Olympians series, as well as the #1 best-selling The Heroes of Olympus series, and The Kane Chronicles series. His previous novels for adults include the hugely popular Tres Navarre series, winner of the top three awards in the mystery genre. He lives in Boston, Massachusetts with his wife and two sons.