She Kills Me: The True Stories of History's Deadliest Women (Hardcover) 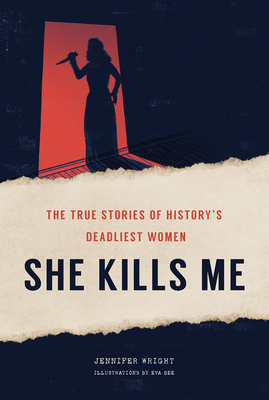 She Kills Me: The True Stories of History's Deadliest Women (Hardcover)


On Our Shelves Now
A powerful collection of stories about women who murdered—for revenge, for love, and even for pleasure—rife with historical details that will have any true crime junkie on the edge of their seat

In every tragic story, men are expected to be the killers. There are countless studies and works of art made about male violence. However, when women are featured in stories about murder, they are rarely portrayed as predators. They’re the prey. This common dynamic is one of the reasons that women are so enthralled by female murderers. They do the things that women aren’t supposed to do and live the lives that women aren’t supposed to want: lives that are impulsive and angry and messy and inconvenient. Maybe we feel bad about loving them, but we eat it up just the same. Residing squarely in the middle of a Venn diagram of feminism and true crime, She Kills Me tells the story of 40 women who murdered out of necessity, fear, revenge, and even for pleasure.
Jennifer Wright is the political editor at large for HarpersBazaar.com, as well as a regular contributor to the New York Post, reporting on millennial issues. She has written for many publications including the New York Times, the Washington Post, McSweeny’s, The New Yorker, and Glamour.
"this collection will both creep you out and leave you a little bit inspired, depending on the story you read."
— BookRiot

“Wright sets the record straight...Each account is brief, an amuse-bouche for readers interested in crimes perpetuated by women. This book of bite-size essays will appeal to fans of crime podcasts such as My Favorite Murder. Recommended for libraries seeking to diversify their true crime collections.”