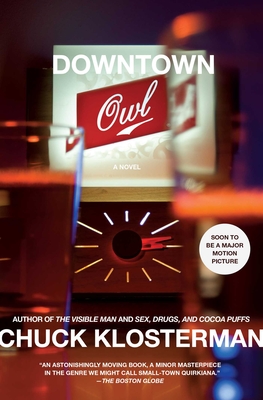 “Chuck Klosterman has hit the nail on the head in this depiction of small town life in the Midwest. It all rings true: the new teacher in town, single and every single man after her; the high school football coach; the town with more bars than churches. A very enjoyable read with great characters and an unexpected ending.”
— Carl Wichman, Varsity Mart, Fargo, ND

Somewhere in rural North Dakota, there is a fictional town called Owl. They don’t have cable. They don’t really have pop culture, but they do have grain prices and alcoholism. People work hard and then they die. But that’s not nearly as awful as it sounds; in fact, sometimes it’s perfect. Mitch Hrlicka lives in Owl. He plays high school football and worries about his weirdness, or lack thereof. Julia Rabia just moved to Owl. A history teacher, she gets free booze and falls in love with a self-loathing bison farmer. Widower and local conversationalist Horace Jones has resided in Owl for seventy-three years. They all know each other completely, except that they’ve never met. But when a deadly blizzard—based on an actual storm that occurred in 1984—hits the area, their lives are derailed in unexpected and powerful ways. An unpretentious, darkly comedic story of how it feels to exist in a community where local mythology and violent reality are pretty much the same thing, Downtown Owl is “a satisfying character study and strikes a perfect balance between the funny and the profound” (Publishers Weekly).
Chuck Klosterman is the bestselling author of many books of nonfiction (including The Nineties, Sex, Drugs, and Cocoa Puffs, I Wear the Black Hat, and But What If We're Wrong?) and fiction (Downtown Owl, The Visible Man, and Raised in Captivity). He has written for The New York Times, The Washington Post, GQ, Esquire, Spin, The Guardian, The Believer, Billboard, The A.V. Club, and ESPN. Klosterman served as the Ethicist for The New York Times Magazine for three years, and was an original founder of the website Grantland with Bill Simmons.
"An astonishingly moving book, a minor masterpiece in the genre we might call small-town quirkiana." -- The Boston Globe

"It's tempting to compare this novel with Sherwood Anderson's classic portrait of small-town American life, Winesburg, Ohio. But no one in Winesburg listened to Ozzy Osbourne. And Klosterman is much funnier than Anderson." -- The Washington Post