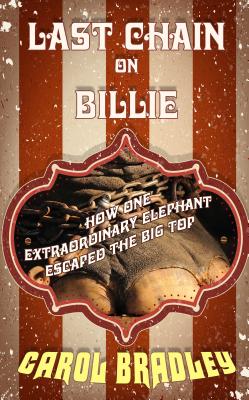 By Carol Bradley
Questions about availability for this title? Ask us here!
Availability to be confirmed

Against the backdrop of a glittering but brutal circus world, "Last Chain on Billie" charts the history of elephants in America, the inspiring story of the Elephant Sanctuary and the spellbinding tale of a resilient elephant who defied the system even as she struggled to conquer her past, who never lost sight of the life she was meant to have.Left in the wild, Billie the elephant would have spent her days surrounded by family, free to wander the jungles of Asia. Instead, traders captured her as a baby and shipped her to America, where she learned to carry humans, stand on a tub and balance on one leg - the full repertoire of elephant tricks. For decades, Billie crisscrossed the country, dazzling audiences as she performed breathtaking stunts. But behind the scenes she lived a life of misery: traveling in trucks, chained for hours on end, barely able to move, giving eight-minute performances under harsh lights and to the sounds of blaring music. And worse.Finally, she got a lucky break. As part of the largest elephant rescue in American history, Billie wound up at a sanctuary for performing elephants in Tennessee, able once more to roam through open meadows and share her days with a herd. She would never be beaten again. But, overcome with anxiety, she withdrew from the rest of the elephants and refused to let anyone remove a chain still clamped around her leg. Her caregivers began to wonder if Billie could ever escape her emotional wounds. The compelling story of Billie's battle to reclaim her old self is a testament to the intelligence, emotional complexity and remarkable strength of all elephants, captive or free.

CAROL BRADLEY is an award-winning former newspaper reporter and the author of the critically praised "Saving Gracie: How One Dog Escaped the Shadowy World of American Puppy Mills." She studied animal law at Harvard University, where she was one of two dozen journalists worldwide chosen in 2003 to spend a year as a Nieman Fellow. She lives in Montana with her family.