Pictures at a Revolution: Five Movies and the Birth of the New Hollywood (Compact Disc) 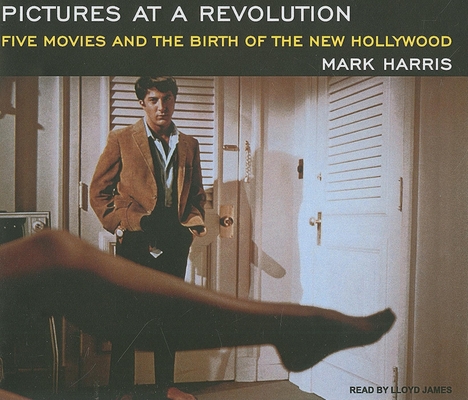 By Mark Harris, Lloyd James (Narrated by)
$39.99
Availability to be confirmed

The epic human drama behind the making of the five movies nominated for Best Picture in 1967-Guess Who's Coming to Dinner, The Graduate, In the Heat of the Night, Doctor Dolittle, and Bonnie and Clyde-and through them, the larger story of the cultural revolution that transformed Hollywood, and America, forever. It's the mid-1960s, and westerns, war movies, and blockbuster musicals such as Mary Poppins and The Sound of Music dominate the box office. The Hollywood studio system, with its cartels of talent and its production code, is hanging strong, or so it would seem. Meanwhile, Warren Beatty wonders why his career isn't blooming after the success of his debut in Splendor in the Grass; Mike Nichols wonders if he still has a career after breaking up with Elaine May; and even though Sidney Poitier has just made history by becoming the first black Best Actor winner, he's still feeling completely cut off from opportunities other than the same "noble black man" role. And a young actor named Dustin Hoffman struggles to find any work at all. By the time the Oscar ceremonies roll around in the spring of 1968, when In the Heat of the Night wins the 1967 Academy Award for Best Picture, a cultural revolution has hit Hollywood with the force of a tsunami. The unprecedented violence and nihilism of fellow nominee Bonnie and Clyde has shocked old-guard reviewers but helped catapult Warren Beatty and Faye Dunaway into counterculture stardom and made the movie one of the year's biggest box-office successes. Just as unprecedented has been the run of nominee The Graduate, which launched first-time director Mike Nichols into a long and brilliant career in filmmaking, to say nothing of what it did for Dustin Hoffman, Simon and Garfunkel, and a generation of young people who knew that whatever their future was, it wasn't in plastics. Sidney Poitier has reprised the noble-black-man role, brilliantly, not once but twice, in Guess Who's Coming to Dinner and In the Heat of the Night, movies that showed in different ways both how far America had come on the subject of race in 1967 and how far it still had to go. What City of Nets did for Hollywood in the 1940s and Easy Riders, Raging Bulls for the 1970s, Pictures at a Revolution does for Hollywood and the cultural revolution of the 1960s. As we follow the progress of these five movies, we see an entire industry change and struggle and collapse and grow-we see careers made and ruined, studios born and destroyed, and the landscape of possibility altered beyond all recognition. We see some outsized personalities staking the bets of their lives on a few films that became iconic works that defined the generation-and other outsized personalities making equally large wagers that didn't pan out at all. The product of extraordinary and unprecedented access to the principals of all five films, married to twenty years' worth of insight covering the film industry and a bewitching storyteller's gift, Mark Harris's Pictures at a Revolution is a bravura accomplishment and a work that feels iconic itself.

Lloyd James has been narrating since 1996, has recorded over six hundred books in almost every genre, has earned six "AudioFile" Earphones Awards, and is a two-time nominee for the prestigious Audie Award.

"Pictures at a Revolution is a superb achievement, and one can only hope that some aspiring, wild-eyed auteur reads it and storms the studio gates." ---The Boston Globe