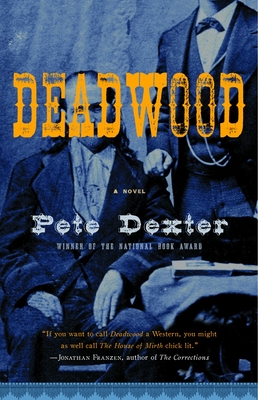 
Backordered
DEADWOOD, DAKOTA TERRITORIES, 1876: Legendary gunman Wild Bill Hickcock and his friend Charlie Utter have come to the Black Hills town of Deadwood fresh from Cheyenne, fleeing an ungrateful populace. Bill, aging and sick but still able to best any man in a fair gunfight, just wants to be left alone to drink and play cards. But in this town of played-out miners, bounty hunters, upstairs girls, Chinese immigrants, and various other entrepeneurs and miscreants, he finds himself pursued by a vicious sheriff, a perverse whore man bent on revenge, and a besotted Calamity Jane. Fueled by liquor, sex, and violence, this is the real wild west, unlike anything portrayed in the dime novels that first told its story.
Pete Dexter is the author of the National Book Award winner Paris Trout and of God's Pocket, Deadwood, Brotherly Love, The Paperboy and Train. He was born in Michigan and raised in Georgia, Illinois, and eastern South Dakota. He lives on Puget Sound, Washington.
“If you want to call Deadwood a Western, you might as well call The House of Mirth chick lit. Dexter looked at the dark, twisted, ridiculous doings of Bill Hickok and company, said to himself, ‘I recognize that!’ and gave us a world-class entertainment.” —Jonathan Franzen, author of The Corrections“Unpredictable, hyperbolic and, page after page, uproarious; a joshing book written in high spirits and a raw appreciation of the past.” --The New York Times Book Review“Splendid. . . . Rumor put straight. . . . A carefully researched knitting of events into their most dazzling fabric.” --The Philadelphia Inquirer“Deadwood may well be the best western ever written.” —The Washington Post Book World"What deepens and darkens [Dexter's] writing, so that art is the precise word to describe it, is a powerful understanding that character rules, that we live with our weaknesses and die of our strengths." --Time"Dexter is a master of colloquial poetry, of moods revealed through gestures and settings." --Playboy "One of the greatest American writers... a storyteller who cuts straight to the nerve." --Scott L. Turow"Dexter's strongest suit is his exquisite understanding of the finely meshed engines of greed, appetite, and interest." --The New York Times Book Review"Great, eccentric characters....Dexter's writing is a living thing." --USA Today