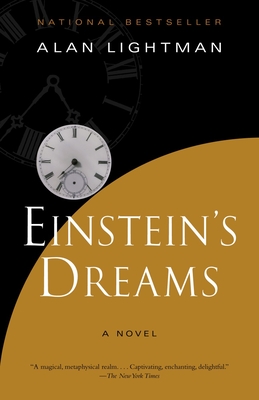 
On Our Shelves Now
NATIONAL BESTSELLER • A modern classic explores the connections between science and art, the process of creativity, and ultimately the fragility of human existence.

Einstein’s Dreams is a fictional collage of stories dreamed by Albert Einstein in 1905, about time, relativity and physics. As the defiant but sensitive young genius is creating his theory of relativity, a new conception of time, he imagines many possible worlds. In one, time is circular, so that people are fated to repeat triumphs and failures over and over. In another, there is a place where time stands still, visited by lovers and parents clinging to their children. In another, time is a nightingale, sometimes trapped by a bell jar.

Now translated into thirty languages, Einstein’s Dreams has inspired playwrights, dancers, musicians, and painters all over the world. In poetic vignettes, it explores the connections between science and art, the process of creativity, and ultimately the fragility of human existence.

ALAN LIGHTMAN is the author of six novels, including Einstein’s Dreams, which was an international bestseller, and The Diagnosis, which was a finalist for the National Book Award. He is also the author of three collections of essays and several books on science. His work has appeared in The Atlantic, Granta, Harper’s, The New Yorker, The New York Review of Books, and Nature, among other publications. Since beginning his career as a theoretical physicist, Lightman has taught at Harvard and at MIT, where he was the first person to receive a dual faculty appointment in science and in the humanities. He lives in the Boston area.

“Lightman is an artist who paints with the notion of time.” —Los Angeles Times