Love, Sophia on the Moon (Hardcover) 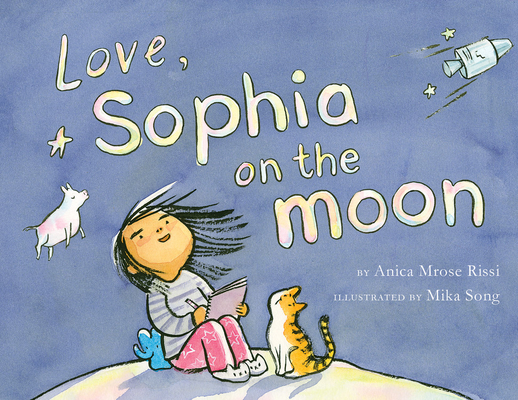 Love, Sophia on the Moon (Hardcover)

First we see Sophia sitting in time out and her mom cleaning up a broken vase. Next we read a letter Sophia has written explaining that she is running away to the moon. The rest of the book is a series of letters between the two, and ends with a note from mom saying, "Even when you're mad, I love you to the moon. And all the way back." The letters back and forth are clever enough to make this fun for the adult reading it aloud.

— Jackie
Life on Earth isn't always fair, so Sophia runs off to the moon, where there are no bedtimes, no time-outs, and no Mom.
But as Sophia and her mom send letters to each other, Mom has a clever comeback for all of Sophia's angry notes. Home starts to sound not-quite-so-bad, especially when Mom reports that someone from the moon has moved in to Sophia's old room, they're having spaghetti for dinner, and they're reading Sophia's favorite story at bedtime.
A through line of unconditional love underscored with lots of humor and imagination makes this picture book a stellar pick for storytime.
Anica Mrose Rissi grew up on an island off the coast of Maine, where she read a lot of books and loved a lot of pets. She now tells and collects stories, makes up songs on her violin, and eats lots of cheese with her friends in Princeton, New Jersey, where she lives with her dog, Arugula. She is also the author of Out for Wolf!, illustrated by Charles Santoso, The Teacher's Pet, illustrated by Zachariah OHora, and the Anna, Banana chapter-book series. Find out more at anicarissi.com and the author invites you to follow her @anicarissi on Instagram and Twitter.

Mika Song grew up in Manila, Philippines and Honolulu, Hawaii before moving to New York to study at Pratt Institute. Before devoting herself to writing and illustrating children's books, she worked in children's educational animation. In 2015, she received the Portfolio Award at the Society of Children's Book Writers and Illustrators Winter Conference in NYC. Some of her books include A Friend for Henry, written by Jenn Bailey, and Tea with Oliver and Picnic with Oliver, both of which she wrote and illustrated. She invites you to visit her online at mikasongdraws.com.
Amazon's Best Books of April 2020
2021 Paterson Prize for Books for Young People
Maine Literary Awards? 2021 Winner, Children's

"A gentle, even adorable reminder for children that their parent still loves them even if they yell.... Readers will love it to the moon and back."—Kirkus Reviews

"Gently portrays the stubborn flight and the resulting plight of a frustrated child, and a mother whose measured responses and funny nuggets of rhetoric show that she loves her child to the moon-and 'all the way back.'"—Publishers Weekly

* "Tender, funny.... Captures the determination and obstinacy of children and the steady, unwavering love of a parent."
—BookPage, starred review