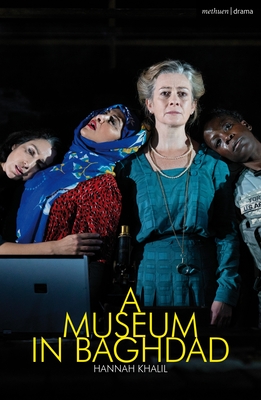 This is about my responsibility. Doing what is right. Being where I'm needed. I've started a job and I must finish it. I owe it to the people of Iraq.

In 1926, the nation of Iraq is in its infancy, and British archaeologist Gertrude Bell is founding a museum in Baghdad. In 2006, Ghalia Hussein is attempting to reopen the museum after looting during the war.

Decades apart, these two women share the same goals: to create a fresh sense of unity and nationhood, to make the world anew through the museum and its treasures. But in such unstable times, questions remain. Who is the museum for? Whose culture are we preserving? And why does it matter when people are dying?

A story of treasured history, desperate choices and the remarkable Gertrude Bell. This edition of Hannah Khalil's epic new play was published to coincide with the world premiere at the RSC's The Other Place in 2019.

Hannah Khalil had her first short play, Ring, selected for the Soho Theatre's Westminster Prize and her first full- length piece, Leaving Home, staged at the King's Head, London. Most recently, her play Bitterenders won Sandpit Arts' Bulbul 2013 competition and was produced at Z Space, San Francisco, as part of Golden Thread's ReOrient Festival. Her monologue The Worst Cook in the West Bank was performed as part of an evening of short plays about Arab women in the Arab Spring at the Old Red Lion and the Unity Theatre as part of the Liverpool Arabic Arts Festival. The Scar Test was commissioned by Untold Arts and was performed in a scratch performances at the Arcola Theatre in June 2015 and went on a UK tour in June 2017