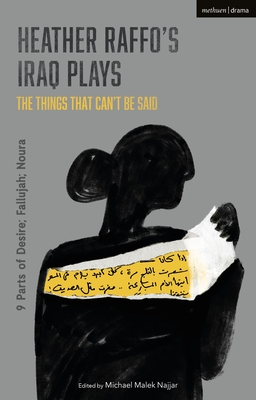 The Things That Can't Be Said: Three Plays About Iraq is a trilogy of plays by renowned Iraqi American playwright/performer Heather Raffo including 9 Parts of Desire, Fallujah: TheFirst Opera about the Iraq War, and Noura.

In these three works Raffo explores the indelible effects of war on Iraqis, Americans, and the refugees caught between the two cultures. When considered together, these three works give voice to nearly two decades of rarely examined traumas that have reshaped cultural and national identity for both Americans and Iraqis since the events of 9/11.

Heather Raffo is a renowned playwright and performer whose work has been described by The New Yorker as an example of "how art can remake the world." An American with Iraqi heritage, her work is seen as a rare bridge between western and eastern cultures.

With ongoing debates about the legacy of America's foreign wars and future role in the Middle East, this volume offers a uniquely historical and deeply human perspective on the political issues of our time. Spanning a decade and a half, together these works form a mosaic of untold stories that were ground breaking in their time and continue to profoundly impact communities and classrooms internationally.

9 Parts of Desire (2003): "First Choice/The Best Shows in London" by The Times, and as one of the "Five Best Plays" in London by The Independent. Its award winning, Off-Broadway premiere ran for nine sold out months and was a critics pick of the The New York Times, Time Out, and Village Voice. The play then received productions in nearly every major regional theatre market in American before being translated for international productions in Brazil, Greece, Sweden, Hungary, India, Turkey, Malta, France, Iraq, Egypt, and Israel. It was the first commercial hit on a national and international stage by an Arab American playwright helping to birth a new genre of Middle Eastern American Theatre.

Fallujah (2016) received its world premiere at Long Beach Opera before transferring to NYC Opera. The first ever opera about the Iraq War it tells a U.S. Marine's account of the battle of Fallujah it focuses on moral injury and veteran suicide.

Noura(2018) won the L. Arnold Weissberger New Play Award and was hailed "The Most Ambitious Premiere" of the Women's Voices Theatre Festival by The Washington Post and "stirringly powerful" by The New York Times. Told from inside the marriage of an Iraqi family, the play explores the lingering cost of exile for both recent refugees and more established American immigrants. Drawing inspiration from Ibsen's A Doll's Housand championed as a first of its kind feminist refugee narrative, it is already being included in university curriculum both in America and abroad.

Heather Raffo is the solo performer and writer of the Off Broadway hit, 9 Parts of Desire which details the lives of nine Iraqi women. For her creation and performance of 9 Parts and its national and international tour, Heather garnered many awards including a Lucille Lortel Award, and the prestigious Susan Smith Blackburn and Marian Seldes- Garson Kanin playwriting awards, as well as Helen Hayes, Outer Critics Circle and Drama League nominations, for outstanding performance. Raffo served as 2010-2011 Artist in Residence at Vassar College, sponsored by the Mellon Foundation. She enjoys an ongoing residency in the Department of Performing Arts at Georgetown University. She has taught and performed at dozens of universities and arts centers both in the United States and internationally engaging students about the politics and arts of Iraq and about her own experience as an Iraqi-American playwright and actress. Raffo received her bachelor of arts in English from the University of Michigan and her masters of fine arts in acting performance from the University of San Diego. She also studied at the Royal Academy of Dramatic Art, London. Originally from Michigan, Heather currently lives in New York. Her father is from Iraq and her mother American.Michael Malek Najjar is an Associate Professor of Theatre Arts with a specialization/ concentration in Arab American and Middle Eastern Theatre forms at the University of Oregon. He is the author of Arab American Drama, Film and Performance, 1908 to the Present: A Critical Study and the editor of The Selected Works of Yussef El Guindi and Four Arab American Plays: Works by Leila Buck, Jamil Khoury, Yussef El Guindi, and Lameece Issaq & Jacob Kader. He also co-edited Six Plays of the Israeli-Palestinian Conflict. He is currently serving on the advisory board of Arab Stages, a journal devoted to broadening international awareness andunderstanding of the theatre and performance cultures of the Arab-Islamic world and of its diaspora, and he is writing Middle Eastern American Theatre: Communities, Cultures, and Creators for Bloomsbury/Methuen Drama.