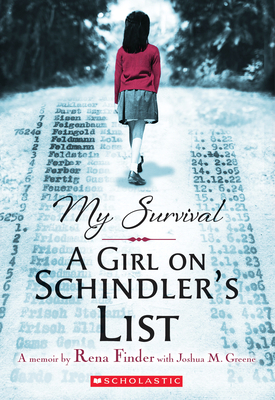 The astonishing true story of a girl who survived the Holocaust with the help of Oskar Schindler, of Schindler's List fame.

Rena Finder was only eleven when the Nazis forced her and her family -- along with all the other Jewish families -- into the ghetto in Krakow, Poland. Rena worked as a slave laborer with scarcely any food, and watched as friends and family were sent away.

Then Rena and her mother ended up working for Oskar Schindler, a German businessman who employed Jewish prisoners in his factory and kept them fed and healthy. But Rena's nightmares were not over. She and her mother were deported to the concentration camp Auschwitz. With great cunning, it was Schindler who set out to help them escape.

Here in her own words is Rena's gripping story of survival, perseverance, tragedy, and hope. Including pictures from Rena's personal collection and from the time period, this unforgettable memoir introduces young readers to an astounding and necessary piece of history.

Joshua M. Greene produces books and films about the Holocaust. His documentaries have been broadcast in twenty countries and his books translated into eight languages. He has taught Holocaust history for Fordham and Hofstra Universities. He lives in Old Westbury, New York.
Rena Finder was born in Krakow, Poland, and survived the Holocaust. Following the war, Rena moved to the United States with her husband, where she raised a family. Rena has dedicated herself to teaching about "history's darkest hour" and about the need to always speak out against injustice. She has shared her story with schools, colleges, and synagogues over the years, and she is a founding survivor of Facing History and Ourselves.

Praise for My Survival: A Girl on Schindler's List

"A straightforward and accessible Holocaust survivor's memoir shows Oskar Schindler through the eyes of a young person he saved... Rena, now 90, is a Holocaust educator, and her matter-of-fact narration reflects this. She urges readers, "when you see a bully, do something. Go get help." A vital look at one complicated man's unwillingness to be complicit." -- Kirkus Reviews