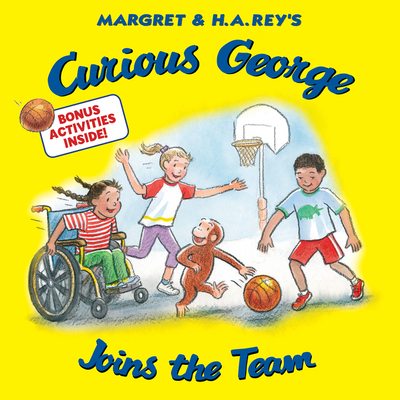 
Backordered
In this Curious George story, George learns that a wheelchair doesn't stop his friend Tina from anything — even joining a basketball team! Now in paperback.

Curious George has a playdate at a park designed for children of all abilities, perfect for his new friend, Tina, who uses a wheelchair. While they are playing together, Tina spots some kids playing her favorite game: basketball. George jumps right into the action, but Tina is too shy to ask to join. George suspects Tina is just as good—even better—than the other kids. Can he come up with a way to show the players she's got game and help her overcome her shyness? This story celebrates how kids of all abilities can play together!

Margret and H. A. Rey created many books during their lives together, including Curious George, one of the most treasured classics of all time, as well as other favorites like Pretzel, Spotty, and Find the Constellations. They had many pets—including two marmoset monkeys that joined them on one of their steamship journeys across the Atlantic. Committed philanthropists in their own lives, a portion of proceeds from each Curious George book sold flows to the Curious George Foundation, which funds programs for children that encourage inquisitiveness in learning and exploring. Curious George has been successfully adapted into a major motion picture and an Emmy-winning television show on PBS and “Pretzel and the Puppies,” based on their picture books, is a streaming series on Apple TV+. www.curiousgeorge.com www.pretzelandthepuppies.com