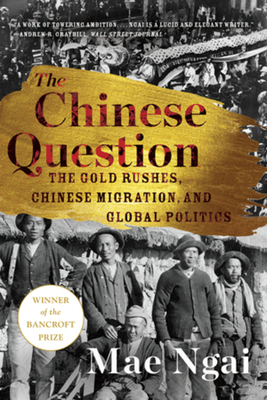 Winner of the 2022 Bancroft Prize

Shortlisted for the 2022 Cundill History Prize

How Chinese migration to the world’s goldfields upended global power and economics and forged modern conceptions of race.

In roughly five decades, between 1848 and 1899, more gold was removed from the earth than had been mined in the 3,000 preceding years, bringing untold wealth to individuals and nations. But friction between Chinese and white settlers on the goldfields of California, Australia, and South Africa catalyzed a global battle over “the Chinese Question”: would the United States and the British Empire outlaw Chinese immigration?

This distinguished history of the Chinese diaspora and global capitalism chronicles how a feverish alchemy of race and money brought Chinese people to the West and reshaped the nineteenth-century world. Drawing on ten years of research across five continents, prize-winning historian Mae Ngai narrates the story of the thousands of Chinese who left their homeland in pursuit of gold, and how they formed communities and organizations to help navigate their perilous new world. Out of their encounters with whites, and the emigrants’ assertion of autonomy and humanity, arose the pernicious western myth of the “coolie” laborer, a racist stereotype used to drive anti-Chinese sentiment.

By the turn of the twentieth century, the United States and the British Empire had answered “the Chinese Question” with laws that excluded Chinese people from immigration and citizenship. Ngai explains how this happened and argues that Chinese exclusion was not extraneous to the emergent global economy but an integral part of it. The Chinese Question masterfully links important themes in world history and economics, from Europe’s subjugation of China to the rise of the international gold standard and the invention of racist, anti-Chinese stereotypes that persist to this day.

Mae Ngai is Lung Family Professor of Asian American Studies and professor of history at Columbia University. She is the author of the award-winning book Impossible Subjects and The Lucky Ones. She lives in New York City and Accokeek, Maryland.
Meticulously researched….A deep historical study, and a timely re-examination of the persistent Chinese Question in America and elsewhere.
— Yunte Huang - New York Times Book Review

[An] important and eminently readable book.
— Simon Winchester - The Spectator

This meticulously researched history spanning nearly two centuries reveals how the Chinese Question has been deeply embedded in Anglo-American global views of China. The Chinese Question shows how entire countries can fall prey to old racialized narratives that may lead to unintended and dangerous consequences. Ngai’s is a cautionary tale in today’s increasingly interdependent and fragile world.

This book will help the reader understand a troubled past and see contemporary conflicts between China and the West in a broader perspective.
— Walter Clemens - New York Journal of Books

Ngai brilliantly reconstructs how race became woven into the fabric of international capitalism and wired into the politics of nations. A stunning, vivid, and indispensable history.
— Gary Gerstle, University of Cambridge

Mae Ngai shows how the racist coolie stereotype was effectively exploited decade after decade to advance global capitalism and imperialism. The sense of urgency shines through this poignant and provocative work. Powerful and empowering.
— Elizabeth Sinn, author of Pacific Crossing: California Gold, Chinese Migration, and the Making of Hong Kong

Mae Ngai slays the coolie myth and resurrects the history of Chinese in early globalization with all its promise of improvement and constant struggle against racist oppression. Never has the spectacular story of the establishment and persistence of Chinese communities across three continents been better told.
— Odd Arne Westad, Yale University

Truly a tour de force of scholarship [The Chinese Question is] a detailed, vivid, close-up depiction of the historic encounters that followed the momentous Chinese migrations of the nineteenth century.

A remarkable combination of historical research, analysis, and empathy stretching over four continents and three gold rushes. In Mae Ngai’s skilled hands, The Chinese Question is more than just a study of racism; it reveals the contours of capitalism and colonialism since the nineteenth century.

Mae Ngai’s beautifully crafted global narrative dismantles widely accepted, and deeply racist, tropes about Chinese migration. This is one of the few books that will make you genuinely rethink an important episode.
— Sven Beckert, Laird Bell Professor of History, Harvard University, and author of Empire of Cotton

This [is a] remarkable book…[It] cuts through modern world history in a most refreshing way and contributes to our understanding of power rivalry that remains with us today.
— Wang Gungwu, National University of Singapore

Eureka! In telling this comparative and connected history, The Chinese Question mines a rich stream, bringing to life Chinese people who pushed back against settler racism in so-called 'white men’s countries,' such as California and Australia. This is a stunningly revealing and timely excavation of the racist stereotypes that continue to shape white responses to China and the Chinese.

— Warwick Anderson, University of Sydney, and author of The Cultivation of Whiteness

Mae Ngai has produced an epic account of Chinese pioneers who traversed the Pacific, Indian and Atlantic oceans to three gold-bearing continents in the late nineteenth and early twentieth century. Beyond presenting an archivally accurate history of these encounters where race and money were the prime drivers of engagement, her research has unearthed an overtly human dimension where numbers are names, statistics incidences and hearsays realities. These encounters on the gold mines of America, Australia and South Africa led to widespread malicious economic expulsion and vindictive political exclusion which it could be argued laid the foundation for much of the burgeoning Sino-phobia evident across the globe over a century later.
— Karen L. Harris, University of Pretoria

Ngai adeptly narrates both seismic shifts in the world economy and the nuanced dynamics of small communities, paying particular attention to the choices made by individual immigrants as
they navigated harsh and unfair foreign environments. Every aspect of Ngai's inquiry is sharply relevant today on many fronts.
— Brendan Driscoll - Booklist (starred review)

An ambitious, diligent work. … A multilayered world history that adds materially to the sadly evergreen topic of immigration exploitation and exclusion.
— Kirkus Reviews

This impressive volume adds a vital chapter in the history of globalization.
— Publishers Weekly