Gods at Play: An Eyewitness Account of Great Moments in American Sports (Hardcover) 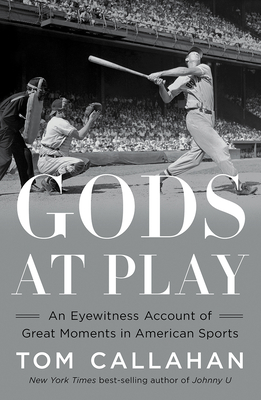 Gods at Play: An Eyewitness Account of Great Moments in American Sports (Hardcover)

A beautifully observed narrative of American sport: character, grit, tragedy, unremarked heroism, and, always, the illuminating story behind the story.

As a columnist for Time magazine, among many other publications, Tom Callahan witnessed an extraordinary number of defining moments in American sport across four decades. He takes us from Roberto Clemente clinching his 3,000th, and final, regular-season hit in Pittsburgh; to ringside for the Muhammad Ali–George Foreman fight in Zaire; and to Arthur Ashe announcing, at a news conference, that he’d tested positive for HIV. There are also little-known private moments: Joe Morgan whispering thank you to a virtually blind Jackie Robinson on the field at the 1972 World Series, or Kareem Abdul-Jabbar saying he was more interested in being a good man than in being the greatest basketball player.

Brimming with colorful vignettes and enlivened by Callahan’s eye for detail, Gods at Play offers surprising portraits of the most celebrated names in sports. Roger Rosenblatt calls Callahan “the most complete sportswriter in America. He knows the most and writes the best."

Tom Callahan, a former senior writer at Time and sports columnist at the Washington Post, is the author of nine books, including The GM and the New York Times bestseller Johnny U. He lives in Reston, Virginia.
The best sports book on the market is "Gods at Play" by Tom Callahan. Buy it, read it, and thank me later.
— Dan Shaughnessy - Boston Globe

Gods at Play has a beguiling charm.

You’re almost guaranteed to learn something new about many sports legends ... [Callahan] has been intimately involved in the sports world since the 1960s and has plenty of tales to tell and wisdom to dispense.
— Joshua Axelrod - Pittsburgh Post-Gazette

Sometimes, a book comes along that hits the reader’s sweet spot – a book that you enjoy from beginning to end, and are a little sorry that it has ended. For me, at least, Gods at Play by Tom Callahan was such a book. ... Not everyone will love it like I did, but most will enjoy it thoroughly.

With grace and humanity, Callahan's seamless mixture of tales from his own career and wisdom gleaned from the athletes he covered makes for a strong offering all around. Lyrical. A resonant memoir.
— Publishers Weekly

Sports fans will find a smooth and pleasant ride on this trip back in time.
— Kirkus Reviews