Never After: The Missing Sword (The Chronicles of Never After #4) (Hardcover) 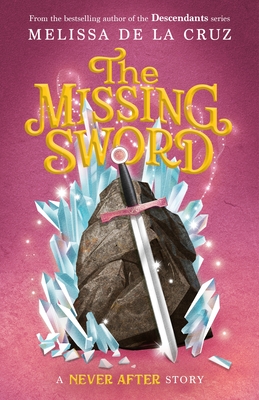 Never After: The Missing Sword (The Chronicles of Never After #4) (Hardcover)

This is book number 4 in the The Chronicles of Never After series.

To save her mother from Olga's evil clutches, Filomena and her friends will set off for new lands and new adventures. Without a moment to lose, Filomena must travel to the legendary land of Camelot to find the sword of Excalibur - the only thing that can save Fil's mother from Olga's mysterious illness that has poisoned her body.

But Camelot is not all that it seems. Fil and the crew quickly realize that there is another fairy tale that has taken hold in the land of Arthurian Legend. . . that of the Wizard of Oz! With the help (and hindrance) of the Wicked Witches of the East and West, lions and tigers and bears will surely be the least of Fil and the gang's troubles.

As the League of Seven follows the yellow brick road to retrieve the sword and complete their most important quest yet, they find nothing will thwart the ogres and their mission to destroy Never After. In a land where nothing is truly as it seems, will Fil and the League of the Seven survive the witch's tests? Or will Olga's perilous plans rip Fil's mother away from her forever?

MELISSA DE LA CRUZ is the #1 New York Times, #1 Publisher’s Weekly and #1 Indie Bound bestselling author of many critically acclaimed and award-winning novels for readers of all ages, and edited the inspiring anthology of true stories, Because I Was a Girl. She grew up in Manila and moved to San Francisco with her family, where she graduated high school salutatorian from The Convent of the Sacred Heart. At Columbia University, she majored in art history and English. Melissa de la Cruz lives in West Hollywood with her husband and daughter.