The Orphan Witch: A Novel (Paperback) 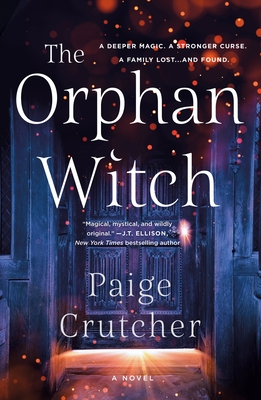 The Orphan Witch: A Novel (Paperback)

A woman who has been alone her entire life, travels to an island to uncover her true identity. She finds her family and an old curse that must be broken in this atmospheric debut novel, perfect for fall reading.

"Mystical, magical, and wildly original...If Alice Hoffman and Sara Addison Allen had a witchy love child, she would be Paige Crutcher. Do not miss this beautifully realized debut!"--- JT Ellison, New York Times bestselling author of Her Dark Lies on The Orphan Witch.

A deeper magic. A stronger curse. A family lost...and found.

Persephone May has been alone her entire life. Abandoned as an infant and dragged through the foster care system, she wants nothing more than to belong somewhere. To someone. However, Persephone is as strange as she is lonely. Unexplainable things happen when she’s around—changes in weather, inanimate objects taking flight—and those who seek to bring her into their family quickly cast her out. To cope, she never gets attached, never makes friends. And she certainly never dates. Working odd jobs and always keeping her suitcases half-packed, Persephone is used to moving around, leaving one town for another when curiosity over her eccentric behavior inevitably draws unwanted attention.

After an accidental and very public display of power, Persephone knows it’s time to move on once again. It’s lucky, then, when she receives an email from the one friend she’s managed to keep, inviting her to the elusive Wile Isle. The timing couldn’t be more perfect. However, upon arrival, Persephone quickly discovers that Wile is no ordinary island. In fact, it just might hold the very things she’s been searching for her entire life.

And some things she did not want. Like 100-year-old curses and an even older family feud. With the clock running out, love might be the magic that saves them all.

Paige Crutcher is a former Southern Correspondent for Publishers Weekly, an artist and yogi, and co-owner of the online marketing company Hatchery.

"The novel's intricate Western European-inspired worldbuilding and layered character make it a fit for fans of Alice Hoffman and Deborah Harkness." - Library Journal

"Enthralling and lyrical, The Orphan Witch weaves a story of a haunting curse and a homecoming that is so well deserved. I love this book!" -J.R. Ward, #1 New York Times bestselling author

“Paige Crutcher’s debut THE ORPHAN WITCH is an enthralling and mystical journey into the heart of her wildly inventive characters. A page-turning story that transports and bewitches, Crutcher knows her magic well. For fans of Alice Hoffman and Deborah Harkness, this debut is imbued with the beauty of myth, lore and legend. Crutcher is a dazzling new voice in fantasy.” --Patti Callahan, New York Times bestselling author of Once Upon a Wardrobe

"Mystical, magical, and wildly original, THE ORPHAN WITCH is a great story from an exciting new voice in fantasy. Persephone May is a witch for the ages, a tough, uncompromising, powerful time walker with a wicked gaze and a heart of gold. Her journey to find her family and herself and the lost witches of Wile Ilse is both rollicking adventure and intimate exploration. If Alice Hoffman and Sara Addison Allen had a witchy love child, she would be Paige Crutcher. Do not miss this beautifully realized debut!"--- JT Ellison, New York Times bestselling author of HER DARK LIES

"Cozy and alluring as a magic cup of tea or a magic library, you'll want to adopt THE ORPHAN WITCH even if she is dangerous." --Sarah Rees Brennan, New York Times bestselling author of the Demon Lexicon Trilogy

“THE ORPHAN WITCH is a well-crafted, magical tale about finding out who you really are—and discovering the true meaning of home. Paige Crutcher’s enchanting debut will charm you from the first page to the last!” --Julianne Maclean, USA Today bestselling author of A FIRE SPARKLING