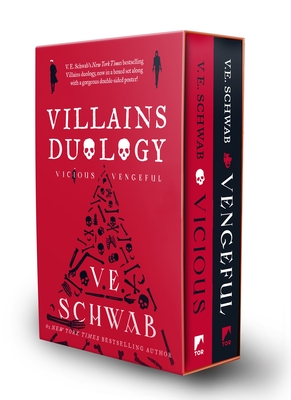 This duology set is perfect for readers who love classic comic book villains and morally gray characters galore! Anyone who loves a good anti-hero story will fall in love with the gritty, dark, and illustrative world that V. E. Schwab paints. The best part of these books: there are no heroes. Jaded morality drives these thrilling narratives. You won't be able to put it down.

In the Villains duology (Vicious, Vengeful) V. E. Schwab brings to life a gritty comic-book-style world in vivid prose: a world where gaining superpowers doesn't automatically lead to heroism, and a time when allegiances are called into question.

"A dynamic and original twist on what it means to be a hero and a villain. A killer from page one…highly recommended!" —Jonathan Maberry, New York Times bestselling author of Marvel Universe vs The Avengers and Patient Zero

VICTORIA “V.E.” SCHWAB is the #1 New York Times bestselling author of more than a dozen books, including the acclaimed novel The Invisible Life of Addie LaRue, the Shades of Magic series, Villains series, This Savage Song, and Our Dark Duet. Her work has received critical acclaim, been featured in the New York Times, Entertainment Weekly, Washington Post and more, translated into more than a dozen languages, and has been optioned for television and film. When she’s not haunting Paris streets or trudging up English hillsides, she lives in Edinburgh, Scotland and is usually tucked in the corner of a coffee shop, dreaming up monsters.