United States of Socialism: Who's Behind It. Why It's Evil. How to Stop It. (Hardcover) 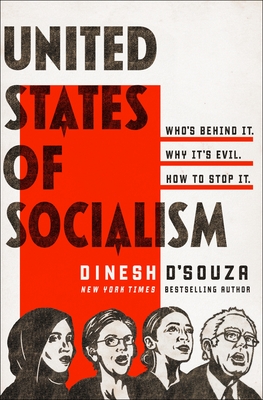 For those who witnessed the global collapse of socialism, its resurrection in the twenty-first century comes as a surprise, even a shock. How can socialism work now when it has never worked before?

In this pathbreaking book, bestselling author Dinesh DSouza argues that the socialism advanced today by the likes of Alexandria Ocasio-Cortez, Bernie Sanders, Ilhan Omar and Elizabeth Warren is very different from the socialism of Lenin, Mao and Castro. It is identity socialism, a marriage between classic socialism and identity politics. Todays socialists claim to model themselves not on Maos Great Leap Forward or even Venezuelan socialism but rather on the socialism that works in Scandinavian countries like Norway and Sweden.

This is the new face of socialism that DSouza confronts and decisively refutes with his trademark incisiveness, wit and originality. He shows how socialism abandoned the working class and found new recruits by drawing on the resentments of race, gender and sexual orientation. He reveals how it uses the Venezuelan, not the Scandinavian, formula. DSouza chillingly documents the full range of lawless, gangster, and authoritarian tendencies that they have adopted.

United States of Socialism is an informative, provocative and thrilling expos not merely of the ideas but also the tactics of the socialist Left. In making the moral case for entrepreneurs and the free market, the author portrays President Trump as the exemplar of capitalism and also the most effective political leader of the battle against socialism. He shows how we can help Trump defeat the socialist menace.

DINESH D'SOUZA has had a prominent career as a writer, scholar, public intellectual, and filmmaker. Born in India, DSOUZA came to the U.S. as an exchange student at the age of 17 and graduated Phi Beta Kappa from Dartmouth College. The author of many bestselling booksIlliberal Education, Obamas America, America and The Big Liehe is also the creator of three of the top ten highest-grossing political documentaries ever made.