Failing Up: How to Take Risks, Aim Higher, and Never Stop Learning (Hardcover) 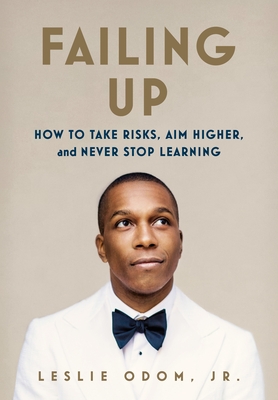 Failing Up: How to Take Risks, Aim Higher, and Never Stop Learning (Hardcover)

Leslie Odom Jr., burst on the scene in 2015, originating the role of Aaron Burr in the Broadway musical phenomenon Hamilton. Since then, he has performed for sold-out audiences, sung for the Obamas at the White House, and won a Tony Award for Best Leading Actor in a Musical. But before he landed the role of a lifetime in one of the biggest musicals of all time, Odom put in years of hard work as a singer and an actor.

With personal stories from his life, Odom asks the questions that will help you unlock your true potential and achieve your goals even when they seem impossible. What work did you put in today that will help you improve tomorrow? How do you surround yourself with people who will care about your dreams as much as you do? How do you know when to play it safe and when to risk it all for something bigger and better?

These stories will inspire you, motivate you, and empower you for the greatness that lies ahead, whether you’re graduating from college, starting a new job, or just looking to live each day to the fullest.

Leslie Odom, Jr. has most recently been seen in the blockbuster Broadway musical Hamilton, for which he won the Tony Award for Best Leading Actor in a Musical for the role of “Aaron Burr.” He is a Grammy Award winner as a principal soloist on Hamilton’s Original Broadway Cast Recording, which won the 2015 award for Best Musical Theater Album. Odom, Jr. originated the role of “Burr” in a sold-out run at The Public Theater in 2015, earning a Drama Desk Award nomination for Outstanding Featured Actor in a Musical and a Lucille Lortel Award nomination for Outstanding Lead Actor in a Musical.

As a recording artist, his self-titled debut album was part-funded by a successful Kickstarter campaign which raised $40,971. The album was released in 2014 by Borderlight Entertainment, Inc. Odom, Jr. has appeared on “Smash," “Law & Order: SVU," “Gotham,” “Person of Interest,” “Grey’s Anatomy,” “House of Lies,” “Vanished” and “CSI: Miami.” He is starring in the upcoming feature film Murder on the Orient Express.

Two-time Academy Award nominee, Tony and Grammy Award winning performer and musician, Leslie Odom, Jr. is a multifaceted multi-hyphenate, who is probably most known for his performance as Aaron Burr in the original Broadway production of Hamilton. He was nominated for an Emmy award for his work in the filmed version of the musical released on Disney+. I Love You More Than You’ll Ever Know is Odom, Jr.'s second book after Failing Up. Odom, Jr. resides in Los Angeles with his beautiful and brilliant wife, Nicolette, and their two children, the apples of his eye!