The Song Poet: A Memoir of My Father (Paperback) 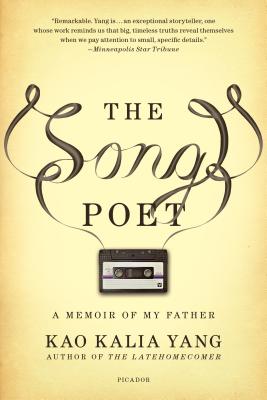 The Song Poet: A Memoir of My Father (Paperback)

Winner of the 2017 Minnesota Book Award in Creative Nonfiction

In the Hmong tradition, the song poet recounts the story of his people, their history and tragedies, joys and losses. He keeps the past alive, invokes the spirits and the homeland, and records courtships, births, weddings, and wishes.

Following her award-winning memoir The Latehomecomer, Kao Kalia Yang now retells the life of her father, Bee Yang, the song poet—a Hmong refugee in Minnesota, driven from the mountains of Laos by America’s Secret War. Bee sings the life of his people through the war-torn jungle and a Thai refugee camp. The songs fall away in the cold, bitter world of a St. Paul housing project and on the factory floor, until, with the death of Bee’s mother, they leave him for good. But before they do, Bee, with his poetry, has burnished a life of poverty for his children, polishing their grim reality so that they might shine.

“Remarkable . . . Yang is an exceptional storyteller, one whose work reminds us that big, timeless truths reveal themselves when we pay attention to small, specific details.”—Minneapolis Star Tribune

“Inventive and touching . . . An elegantly written, moving testament to so many aspects of the human experience.”—Pioneer Press

“A stellar memoir . . . Yang powerfully demonstrates that much of what society doesn’t hold valuable—gifts and talents that don’t translate into monetary or educational success—still carry immense value, if only we choose to see it.”—Library Journal (starred review)

“Kao Kalia Yang allows us to hear the whispered sorrows and hopes of those transplanted onto foreign soil among strangers. I predict that this mystical and historical memoir—of her Hmong family’s suffering in Laos, of the rigors and fears of their life in a refugee camp, of the shock of finding themselves unprepared for city living in Minnesota, and of the pain of discrimination—will become a classic.”—Jane Hamilton-Merritt, author of Tragic Mountains: The Hmong, the Americans, and the Secret Wars for Laos, 1942–1992