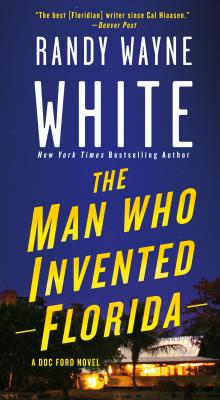 This is book number 3 in the Doc Ford Novels series.

Nobody knows the dark side of the Sunshine State like Doc Ford in the bestselling The Man Who Invented Florida by Randy Wayne White.

When solitary marine biologist Doc Ford focused his telescope on the woman in the white boat, he didn’t know his life was about to be capsized: that his conniving uncle Tucker Gatrell would discover the Fountain of Youth, that The National Enquirer would write about it, and that the law would beat down his door in search of three missing men. But Doc Ford is about to find these things out—the hard way. Because in the shadowy world of Southwest Florida, where gators yawn, cattle graze, and Indian bones are buried, mysteries great and small have found the man to solve them...

Randy Wayne White is the New York Times bestselling and award-winning author of the Doc Ford series. In 2011, White was named a Florida Literary Legend by the Florida Heritage Society. A fishing and nature enthusiast, he has also written extensively for National Geographic Adventure, Men's Journal, Playboy and Men's Health. He lives on Sanibel Island, Florida, where he was a light-tackle fishing guide for many years, and spends much of his free time windsurfing, playing baseball, and hanging out at Doc Ford's Rum Bar & Grille. His first middle-grade novel is Fins.