The Boy Who Knew Everything (Piper McCloud #2) (Paperback) 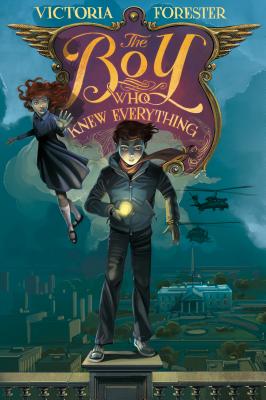 The Boy Who Knew Everything (Piper McCloud #2) (Paperback)

This is book number 2 in the Piper McCloud series.

An epic modern fantasy about an unforgettable friendship.

There is a prophecy.

It speaks of a girl who can fly and a boy who knows everything. The prophecy says that they have the power to bring about great change . . . .

The boy is Conrad Harrington III. The girl is Piper McCloud. They need their talents now, more than ever, if they are to save the world-and themselves.

Victoria Forester does not disappoint in The Boy Who Knew Everything, the long-awaited sequel to New York Times-bestselling The Girl Who Could Fly, which Stephenie Meyer praised as "the oddest/sweetest mix of Little House on the Prairie and X-Men."

This title has Common Core connections.

Victoria Forester is the author of The Girl Who Could Fly, a Booklist Editor’s Choice and Bank Street Best Children’s Book of the Year. She is also a successful screenwriter, and originally wrote The Girl Who Could Fly for film. She liked the story so much that she decided to expand it into her first book. Victoria grew up on a remote farm in Ontario, Canada, and graduated from the University of Toronto. She now lives in Los Angeles with her husband, daughter, and cat.
“The sequel to the best-selling The Girl Who Could Fly centers on Piper's friend Conrad Harrington, son of the soon-to-be president, whose special talent is that he is smarter than the average genius. Now living happily on Piper's family's farm, he is willing to let the bad times go, but, not surprisingly, trouble finds them both . . . What keeps this centered . . . is the firm friendship of Piper and Conrad.” —Booklist