Change of Seasons: A Memoir (Hardcover) 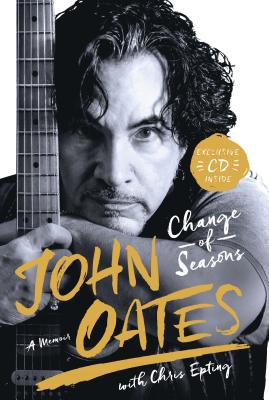 Change of Seasons: A Memoir (Hardcover)

Includes an exclusive EP as a companion to the book!

John Oates was born at the perfect time, paralleling the birth of rock ‘n roll. Raised in a small Pennsylvania town, he was exposed to folk, blues, soul, and R&B. Meeting and teaming up with Daryl Hall in the late 1960s, they developed a style of music that was uniquely their own but never abandoned their roots. John uncovers the grit and struggle it took to secure a recording contract with the legendary Atlantic Records and chronicles the artistic twists and turns that resulted in a DJ discovering an obscure album track that would become their first hit record. This is not your typical rock and roll story. John was focused creating great music. Along the way he achieved incredible success, battling the ever-changing pop music landscape and coming to terms with complex managerial, business, and personal challenges.

Daryl Hall and John Oates have over 20 albums together, more than 60 million records sold, and 29 Top 40 hits. They are the most successful pop duo in the world and members of the Rock and Roll Hall of Fame. And yet John’s story has never been told. Relying on his many hand-written journals, he brings to light many fascinating stories spanning his entire life with a journalist’s eye and a poet’s heart.

In Change of Seasons, John shares his highs, lows, triumphs, and failures. He takes the reader on a wild ride through all the eras, personalities and music that has shaped him into what he is.

JOHN OATES grew up outside of Philadelphia in the early ‘50s. At Temple University, he met fellow musician Daryl Hall. Since the two formed Hall & Oates in the early ‘70s, they have recorded 21 albums which have sold over 80 million units, making them the most successful duo in rock history. John lives in Nashville and Colorado.

CHRIS EPTING is an author and award-winning journalist who has written for many publications including The Los Angeles Times, The Wall Street Journal, and Loudwire. His books include Change of Seasons, Adrenalized, and Making Waves.

"His story stands on its own, and it’s one that Oates delights in telling. . . . A charming, almost breezy retrospective. . . . Change Of Seasons is Oates’ moment in the spotlight, which he handles with aplomb." —AV Club

"Change of Seasons is not the Hall and Oates story; it’s the John Oates story (he’s kept diaries for decades), and one is struck not only by how talented he was but how hard he worked at it. It took lots of effort to look that smooth to the tune of 80 million copies." —Austin American-Statesman

"[A] fascinating memoir. . . . Highly recommended for fans of Hall & Oates and those interested in how much work it takes to be a hit act in the music business." —Library Journal

"Oates offers a memoir that might lead even his greatest critics to revisit the ’80s icons. . . . Charm and curiosity distinguish him from the standard-issue pop star....Plenty of entertaining anecdotes on such topics as having Hunter S. Thompson for a neighbor." —Publishers Weekly

"Oates has reason to boast, but his prose is workmanlike and modest; more than anything else, he comes off as a fan of many artists of the day, from the Beatles to the Temptations and the earliest manifestations of Elton John and David Bowie. There’s some Zelig-like right-place, right-time things happening here, too, such as a residence at LA’s famed Tropicana Motel: as he writes, nicely, 'can’t say I wasn’t blown away by the fabulousity of it all because I was.' There’s some sex and drugs along with the rock ’n’ roll, but Oates emerges, like Hall, as a pretty sensible guy who recognized when he was going off the rails; in the end, he emerges as a seeker not of pleasure but of wisdom . . . Oates’ musical admirers will find much to like here." —Kirkus Reviews