Unforgettable: A Son, a Mother, and the Lessons of a Lifetime (Hardcover) 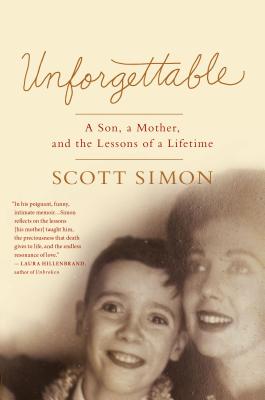 Unforgettable: A Son, a Mother, and the Lessons of a Lifetime (Hardcover)

"In a return to the bighearted storytelling that made him a star NPR correspondent, [Simon] pays full tribute to the ex-showgirl who...taught her only son to be honest, kind, and entertaining. Be assured, tears will fall."--People Magazine

"In his poignant, funny, intimate memoir of his last days with [his mother], Simon reflects on... the preciousness that death gives to life and the endless resonance of love."--Laura Hillenbrand, author of UNBROKEN

UNFORGETTABLE is a son's spirited, affecting, and inspiring tribute to his remarkable mother and the love between parent and child.

When NPR's Scott Simon began tweeting from his mother's hospital room in July 2013, he didn't know that his missives would soon spread well beyond his 1.2 million Twitter followers. Squeezing the magnitude of his final days with her into 140-character updates, Simon's evocative and moving meditations spread virally. Over the course of a few days, Simon chronicled his mother's death and reminisced about her life, revealing her humor and strength, and celebrating familial love.

UNFORGETTABLE expands on those famous tweets to create a memoir that is rich, deeply affecting, heart-wrenching, and exhilarating. His mother was a glamorous woman of the Mad Men-era; she worked in nightclubs, modeled, dated mobsters and movie stars, and was a brave single parent to young Scott Simon. Spending their last days together in a hospital ICU, mother and son reflect on their lifetime's worth of memories, recounting stories laced with humor and exemplifying resilience.

UNFORGETTABLE is not only one man's moving celebration of his mother's colorful life,

SCOTT SIMON is one of America's most admired writers and broadcasters, having reported from all over the world and from many wars. He is now the award-winning host of Weekend Edition Saturday. With over 4 million listeners it is the most-listened to news program on NPR. Simon has won a Peabody and an Emmy for his reporting and also has over 1.2 million followers on Twitter.

“Patricia Lyons Simon Newman was a bombshell: drop-dead gorgeous, glamorous, hilarious, insightful, curious, a woman whose bounding, generous, mischievous presence beckoned to others like the first warm sunshine of spring. She was wise, irreverent, brave in loss and grateful in joy, and urgently, thankfully alive to the beauty in everything and everyone. And before anything else, she was a profoundly devoted mother to her son, NPR host, journalist, and author, Scott Simon. In his poignant, funny, intimate memoir of his last days with her, Simon reflects on the lessons she taught him, the preciousness that death gives to life, and the endless resonance of love. This is an unforgettable meditation on a life lived, as Hemingway wrote, 'all the way up.'” —Laura Hillenbrand, author of UNBROKEN: A World War II Story of Survival, Resilience and Redemption and SEABISCUIT: An American Legend on the audio recording of Unforgettable

“In a return to the bighearted storytelling that made him a star NPR correspondent, [Simon] pays full tribute to the ex-showgirl who...taught her only son to be honest, kind, and entertaining. Be assured, tears will fall.” —People Magazine

“With UNFORGETTABLE, Simon reveals not the possibilities of social media but its limits. Those 140-character bursts...seem inadequate compared with the skilled unspooling of this memoir. This book is about family secrets revealed...because a moment arrives when they're all that matter and secrecy no longer does. [Reading this] you realize that the tears have been flowing...easing your way through a book that easily matches its title.” —Carlos Lozada, The Washington Post

“A heartfelt, nostalgic, funny and uplifting celebration. Far from depressing, Simon uses precise prose and nimble portraiture to create an inspiring and unforgettable memoir that reassures readers that even the most ordinary life is extraordinary when examined.” —Shelf Awareness

“Unforgettable is a treasure. It is as poignant and tender and wise as Tuesdays with Morrie, with the added virtues of being unflinching and, quite often, very funny. At its center is a remarkable woman, gorgeous and charming and relentlessly honest, who remains a true star to the very end.” —Scott Turow, author of PRESUMED INNOCENT

“Who would have thought that such short intimate tweets could lead to such literature? This mother and son story is personal, universal, and filled with humor. Scott Simon reminds us of the transience of life and the endurance of love--and that beautiful writing is the best guardian of memory.” —Azar Nafisi, author of READING LOLITA IN TEHRAN

“This is an extraordinary book. Amazing. Breathtaking. Affirming. This book will change lives, restore hope to the broken-hearted, and remind the rest of us of what is truly important.” —Laurie Halse Anderson, author of SPEAK

“Simon's memoir is so captivating that everyone, not just fans of NPR's Weekend Edition Saturday, will enjoy learning about the wellspring that nourished the award-winning journalist's wit, intelligence, heart, and chutzpah. Wait, an enjoyable memoir about a dying mother? Indeed. That is part of Simon's...charisma. Every child should have such an opportunity to be there for his or her mother in those final days and hours. Every mother should have such a gifted child.” —BOOKLIST (*Starred Review)

“A charming tribute to a remarkable woman and the bond between mother and son.” —Kirkus Reviews

“In this tender memoir, Simon finds the last week of his mother's life to be a time for them to cherish each other and tenderly reminisce. He takes his quirky, devoted, gracious mother on her own terms, and his work shimmers as a touching tribute.” —Publishers Weekly

“Refreshing. [Unforgettable] celebrates a happy if quirky childhood and its central beloved architect: Simon's mother. Unforgettable isn't about modern medicine or death. It is about how to live.” —AARP

“No doubt Patricia Newman would be proud of her son and his extraordinarily compelling, heartfelt tribute.” —BOOKPAGE