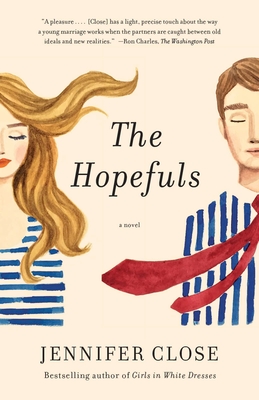 
Availability to be confirmed
A blazingly honest portrait of ambition and marriage, and a brilliantly funny send-up of young D.C., from the bestselling author of Girls in White Dresses.

A New York newlywed, Beth was supportive when her husband, Matt, decided to follow his political dreams all the way to Washington. Yet soon after they move to D.C., Beth realizes that she hates everything about it: the traffic circles, the ubiquitous Ann Taylor suits, the humidity that descends each summer, and, most of all, the lonely dinner parties where anyone who doesn’t work in politics is politely ignored. Things start to change when the couple meets a charismatic White House staffer named Jimmy and his wife, Ashleigh. The four become inseparable, coordinating brunches, birthdays, and long weekends away. But as Jimmy’s star rises higher and higher, the couples’ friendship—and Beth’s relationship with Matt—is threatened by jealousy, competition, and rumors.
JENNIFER CLOSE is the bestselling author of Girls in White Dresses and The Smart One. Born and raised on the North Shore of Chicago, she is a graduate of Boston College and received her MFA in fiction writing from The New School in 2005. She worked in New York in magazines for many years. She now lives in Washington, D.C., and teaches creative writing at George Washington University.
A Mother Jones Best Book of the Year

“Hilarious. . . . A pleasure to read. . . . [Close] has a light, precise touch about the way a young marriage works when the partners are caught between old ideals and new realities.” —Ron Charles, The Washington Post

“Inspired by Close’s own experiences moving to Washington for her husband's work on the Obama campaign, The Hopefuls is blisteringly honest about the circus of American politics and Washington's exhausting culture of competition—one that that renders people outside of political circles virtually invisible.” —Meredith Turits, Elle

“I couldn’t put down this juicy novel, which is all about what striving to make it in politics does to relationships.” —Megan Angelo, Glamour

“Captivating. . . . Close, whose husband worked on Obama’s campaign, uses her knowledge of this world—and her experience as an outsider—expertly. Beth’s conversational narration feels like peering into the diary of someone who shares your deepest insecurities.” —Isabella Biedenharn, Entertainment Weekly

“New York newlyweds head to D.C. to—what else?—chase their dreams. Actually, just Matt’s dreams. His wife, Beth, isn’t all that impressed by the surrounding political haughtiness until she meets another couple, Jimmy and Ash. The Hopefuls will make you rethink inviting your best married friends over for dinner.” —Marie Claire

“A much lighter, funnier version of House of Cards—imagine the jealousy and ambition of the Underwoods married with the humor of a sitcom like New Girl with its focus on friendships and playing at adulthood.” —Lauren Stacks, Chicago Review of Books