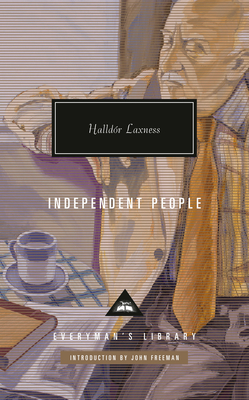 Set in the early twentieth century, Independent People recalls both Iceland's medieval epics and such classics as Sigrid Undset's Kristin Lavransdatter. If Bjartur of Summerhouses, the book's protagonist, is an ordinary sheep farmer, his flinty determination to achieve independence is genuinely heroic and, at the same time, terrifying and bleakly comic. Having spent eighteen years in humiliating servitude, Bjartur wants nothing more than to raise his flocks unbeholden to any man. But Bjartur's spirited daughter wants to live unbeholden to him. What ensues is a battle of wills that is by turns harsh and touching, elemental in its emotional intensity and intimate in its homely detail. Vast in scope and deeply rewarding, Independent People is a masterpiece.

Halldór Laxness was born near Reykjavik, Iceland, in 1902. His first novel was published when he was seventeen. The undisputed master of contemporary Icelandic fiction and one of the outstanding novelists of the century, he has written more than sixty books, including novels short stories, essays, poems, plays and memoirs. In 1955 he was awarded the Nobel Prize for Literature. He died in 1998.

ABOUT THE INTRODUCER:  John Freeman founded the literary annual Freeman's and is the author of several books including Dictionary of the Undoing, Maps and the Park. Currently artist in residence at New York University, he has edited a trilogy of books on inequality, the latest of which is Tales of Two Planets. His work has been published in more than twenty languages.

"Reader rejoice! At last this funny, clever, sardonic and brilliant book is back in print. Independent People is one of my Top Ten Favourite Books of All Time." —Annie Proulx

"There are good books and there are great books and there may be a book that is something still more: it is the book of your life. . . . My favorite book by a living novelist is Independent People." —Brad Leithauser

"This beautiful and heartbreaking novel has haunted me ever since I was lent a rare copy years ago, and I am delighted that what is clearly a masterpiece by a relatively uncelebrated genius will now be available to a wide audience of book lovers. If there is any justice in the world, the name Laxness will soon become a household word, at least in those households where timeless works of the imagination are cherished." —Joel Conarroe

"Laxness has a poet's imagination and a poet's gift for phrase and symbol. . . . Bjartur is a magnificent and complex symbol of peasant independence." —The New York Times Book Review

"A strange story, vibrant and alive. . . . There is a rare beauty in its telling, a beauty as surprising as the authentic strain of poetry that lies in the shoving, battering Icelander." —Atlantic Monthly

"A saga that somehow contrives to recapture the broad, clear air of older Icelandic tales." —The Observer (London)

"[Laxness] gives a large picture of life under primitive conditions, [he] writes vividly, using irony with vigorous effect; amid the brutality and squalor there are rich moments of humor and poetry." —The Spectator (London)