The Hopefuls: A novel (Hardcover) 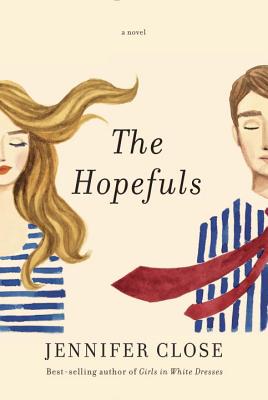 The Hopefuls: A novel (Hardcover)


Availability to be confirmed
A brilliantly funny novel about ambition and marriage from the best-selling author of Girls in White Dresses, The Hopefuls tells the story of a young wife who follows her husband and his political dreams to Washington, D.C., a city of idealism, gossip, and complicated friendships among the young aspiring elite.

When Beth arrives in D.C., she hates everything about it: the confusing traffic circles, the ubiquitous Ann Taylor suits, the humidity that descends each summer. At dinner parties, guests compare their security clearance levels. They leave their BlackBerrys on the table. They speak in acronyms. And once they realize Beth doesn't work in politics, they smile blandly and turn away. Soon Beth and her husband, Matt, meet a charismatic White House staffer named Jimmy, and his wife, Ashleigh, and the four become inseparable, coordinating brunches, birthdays, and long weekends away. But as Jimmy’s star rises higher and higher, the couples’ friendship—and Beth’s relationship with Matt—is threatened by jealousy, competition, and rumors. A glorious send-up of young D.C. and a blazingly honest portrait of a marriage, this is the finest work yet by one of our most beloved writers.
JENNIFER CLOSE is the best-selling author of Girls in White Dresses and The Smart One. Born and raised on the North Shore of Chicago, she is a graduate of Boston College and received her MFA in fiction writing from The New School in 2005. She worked in New York in magazines for many years. She now lives in Washington, DC, and teaches creative writing at George Washington University.
“The Hopefuls captures everything we love to hate about Washington… A hilarious gripefest… Here, finally, is a novel witty enough to match your secret loathing — and tenderhearted enough to make you realize how much you love this damned cesspool after all… [The] winking humor and especially the real affection between Beth and Matt make The Hopefuls a pleasure to read… [Close] has a light, precise touch about the way a young marriage works when the partners are caught between old ideals and new realities… But the real heart of The Hopefuls is the tension between idealism and cynicism inherent to politics... A welcome mixture of humor and wisdom about the good people who run this country — or, for some reason, want to.”
—Ron Charles, The Washington Post

“The author of Girls in White Dresses delivers her latest novel about a couple navigating the political ladder in D.C. Inspired by Close's own experiences moving to Washington for her husband's work on the Obama campaign, The Hopefuls is blisteringly honest about the circus of American politics and Washington's exhausting culture of competition—one that that renders people outside of political circles virtually invisible.”
—Meredith Turits, Elle

“I couldn’t put down this juicy novel, which is all about what striving to make it in politics does to relationships.”
—Megan Angelo, Glamour

“Jennifer Close’s fresh, smart, realistic portrayal of two young Washington couples is a must read for House of Cards junkies…. [D.C.] almost functions as a fifth character in the book, with its own quirks and dynamics and idiosyncrasies.”
—Kimmery Martin, The Huffington Post

“[A] hilarious send up of the very social strata [Close] and her husband orbit. Turns out Washington can laugh at itself, especially when an insider is lobbing the hilarious insults. Plus, Close is an official fan of the District now, and expertly positioned to throw stones.”
—Helena Andrews-Dyer, The Washington Post

“A roman a clef that has D.C. laughing.”
—Jane Ciabattari, LitHub

“A much lighter, funnier version of House of Cards—imagine the jealousy and ambition of the Underwoods married with the humor of a sitcom like New Girl with its focus on friendships and playing at adulthood.”
—Lauren Stacks, Chicago Review of Books

“Close’s novel carries a deceptively light tone. Yes, it’s a comedy, and yes, it’s a relationship novel, but it’s so timely and so wonderfully realized that The Hopefuls isn’t just those things. It’s too good — too important — to be relegated as a work of genre. The Hopefuls captures the competition and ambition of today’s political environment, and that tension builds as the novel progresses. Close writes with a heightened awareness of how rooted the very nature of political struggle is within our very national identity.”
—Bradley Sides, Electric Literature

“Captivating… Close, whose husband worked on Obama’s campaign, uses her knowledge of this world—and her experience as an outsider—expertly. Beth’s conversational narration feels like peering into the diary of someone who shares your deepest insecurities.”
—Isabella Biedenharn, Entertainment Weekly

“New York newlyweds head to D.C. to—what else?—chase their dreams. Actually, just Matt’s dreams. His wife, Beth, isn’t all that impressed by the surrounding political haughtiness until she meets another couple, Jimmy and Ash. The Hopefuls will make you rethink inviting your best married friends over for dinner.”
—Marie Claire

“Close lays the sacrifices and successes of a marriage bare with razor-sharp prose and keen wit. Fans of Lianne Moriarty’s relatable heroines will adore fish-out-of-water Beth, while political junkies will appreciate an insider’s view of a small campaign. With themes reminiscent of The Marriage Plot and perfectly suited for this year’s political climate, The Hopefuls is unflinchingly honest and utterly compelling.”
—Stephanie Turza, Booklist (STARRED review)

“If you love and miss The West Wing, this is one book you’ll want to pick up. Jennifer Close gets so many things about DC and its culture so very right… She also knows political campaigns inside out – the bad and the ugly as well as the good. She writes honestly and convincingly about those aspects of marriage and friendship, too.”
—Claire Handscombe, BookRiot

“Ambition, political power and charisma take center stage in Close’s riveting page turner about two couples who meet in DC—and the toll one pair’s success takes on the other.”
—Entertainment Weekly

“A fascinating drama about relationships, loyalty, the price of aspirations and success, The Hopefuls will surely ensnare you into this world from page one—and hold you there, tightly, until the final word.”
—Refinery29