The Magical Language of Others: A Memoir (Compact Disc) 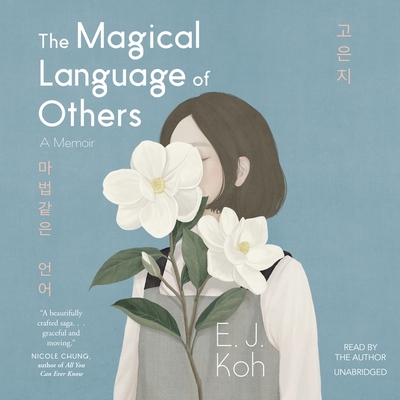 It's hard to neatly encapsulate this wonder of a book. Koh translates her mother's letters from Korean, written during a time when the two were living in the U.S. and South Korea respectively. The rest is memoir drawn from that time but also reaching far back into family history. It's so much more than a sum of its parts, and its quiet, piercing intelligence has stayed with me.

“A beautifully written memoir of history, culture, past, and present — this might be one of the best books I’ve read all year and a close second to Pachinko, one of my all-time favorites. The letters from a mother read from her daughter’s perspective really give you a sense of the complexity of family relationships, and how certain events mold the consequences of what’s to come. Just beautiful!”
— Desirae Wilkerson, Paper Boat Booksellers, Seattle, WA

After living in America for over a decade, Eun Ji's parents return to Korea for work, leaving fifteen-year-old Eun Ji and her brother behind in the family's new California home. Overnight, Eun Ji finds herself in a world made strange in her mother's absence. Her mother writes letters over the years seeking forgiveness and love―letters Eun Ji cannot understand until she finds them years later hidden in a box.

The letters lay bare the impact of her mother's departure, as Eun Ji gets to know the woman who raised her and left her behind. Eun Ji is a student, a traveler, a dancer, a poet, and a daughter coming to terms not only with her parents' prolonged absence, but her family's history: her grandmother's Jun's years as a lovesick wife in Daejeon, the horrors her grandmother Kumiko witnessed during the Jeju Island Massacre. Where, Koh asks, do the stories of our mothers and grandmothers end and ours begin? How do we find words―in Korean, Japanese, English, or any language―to articulate the profound ways that distance can shape love?

The Magical Language of Others is a fearless and poetic mind grappling with forgiveness, reconciliation, legacy, and intergenerational trauma―conjuring an epic saga and love story between mothers and daughters spanning four generations.