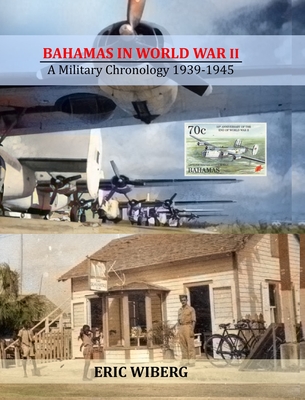 BAHAMAS IN WORLD WAR II: Utilizing the actual diaries of the navies and air forces of Germany, Italy, Britain, and United States, as well as records from the merchant ships of dozens of nations, this book tells the story of daily activities in a million-square-mile war zone. Over 2-million persons participated in an area 1 million square miles, with 150 bases ringing it. All 2,000 persons killed in action on all sides are named, along with 3,000 other participants, 140 ships, and 112 axis submarines. Two dozen units based in the Bahamas are covered, as are the deliveries of over 2,000 aircraft through the colony and the training of 5,000 airmen, from wheels up to wheels down. For a time more than 25% of the population of New Providence were RAF and other military personnel. Then, just over two years after it began, the frenetic activity ended. So far as is known, this is the first such military chronology of a World War II battlefield in the Western Hemisphere. It includes details of 300 RAF and USN accidents, 1,000 U-boat reports of sightings and attacks, 75 RAF wrecks in the Bahamas, 20,000 convoys, 4,000 ship names, and many VIP's, military and royal. Richly illustrated with 25 custom charts and many photographs.