Ripe for the Pickin' (Paperback) 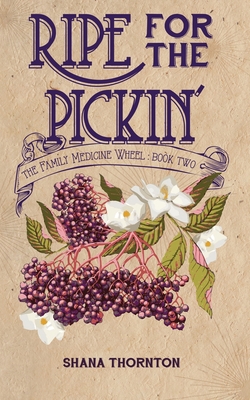 Ripe for the Pickin' (Paperback)

A legendary family treasure is rumored to be buried on the Ballard Farm, and generations have searched for it while pretending as if they don't believe in it. Robin goes looking for it, and instead discovers that she's a songwriter, leading to the creation of her folk band, Poke Sallet Queen and the Family Medicine Wheel.

Ripe for the Pickin' by Shana Thornton is an adventure filled with road trips, old maps, and stories that Robin is shocked to have as her inheritance. While Robin learns about the beliefs and antics of her great-great grandmother, Zona, she and her bandmates are searching for the magic spark in songwriting and performing. This book reveals Zona's journeys in the early 20th century throughout middle Tennessee to perform blessings at locations she and her sisters consider sacred for their natural remedies and spiritual resonance.

The Family Medicine Wheel series is a family history of tall tales, songwriting, moonshining, and secrets. Ripe for the Pickin' by Shana Thornton serves up more of the Ballard family's past and Robin's future.