Abstract Hacktivism: The Making of a Hacker Culture (Paperback) 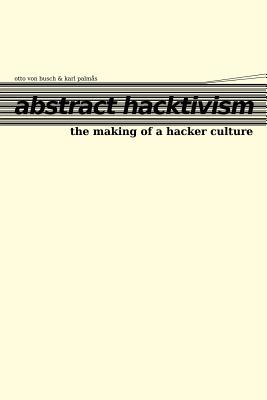 Abstract Hacktivism: The Making of a Hacker Culture (Paperback)

In recent years, designers, activists and businesspeople have started to navigate their social worlds on the basis of concepts derived from the world of computers and new media technologies. According to Otto von Busch and Karl Palmas, this represents a fundamental cultural shift. The conceptual models of modern social thought, as well as the ones emanating from the 1968 revolts, are being usurped by a new worldview. Using thinkers such as Michel Serres, Gilles Deleuze and Manuel DeLanda as a point of departure, the authors expand upon the idea that everyday technologies are profoundly interconnected with dominant modes of thought. In the nineteenth century, the motor replaced the clockwork as the universal model of knowledge. In a similar vein, new media technologies are currently replacing the motor as the dominant 'conceptual technology' of contemporary social thought. This development, von Busch and Palmas argue, has yielded new ways of construing politics, activism and innovation. The authors embark on different routes to explore this shift. Otto von Busch relates the practice of hacking to phenomena such as shopdropping, craftivism, fan fiction, liberation theology, and Spanish social movement YOMANGO. Karl Palmas examines how publications like Adbusters Magazine, as well as business theorists, have adopted a computer-inspired worldview, linking this development to the dot.com boom of the late 1990s. Hence, the text is written for designers and activists, as well as for the general reader interested in cultural studies.