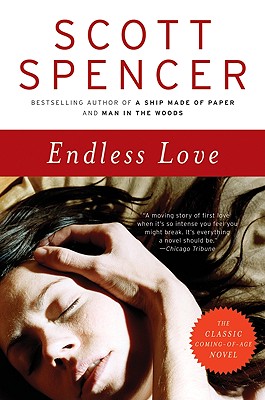 By Scott Spencer
$14.95
Availability to be confirmed

One of the most celebrated novels of its time, Endless Love remains perhaps the most powerful book ever written about young love. Riveting, compulsively readable, and ferociously sexual, Endless Love tells the story of David Axelrod and his overwhelming love for Jade Butterfield.

David and Jade are consumed with each other: their rapport, their desire, their sexuality, take them further than they understand. And when Jade's father banishes David from the home, he fantasizes the forgiveness his rescue of the family will bring, and he sets a "perfectly safe" fire to their house. What unfolds is a nightmare, a dark world in which David's love is a crime and a disease, a world of anonymous phone calls, crazy letters, and new fears—and the inevitable and punishing pursuit of the one thing that remains most real to him: his endless love for Jade and her family.

Published in 1979 and hailed as "one of the best books of the year" by the New York Times, Endless Love is the novel that first established Scott Spencer as "the contemporary American master of the love story" (Publishers Weekly).