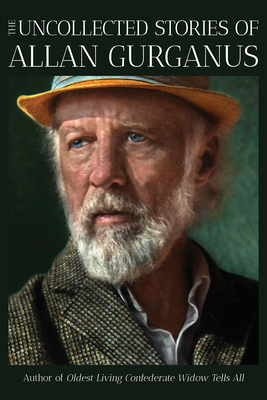 Gurganus was and is my most important teacher. He writes with a deep and joyful expansiveness that is completely his own. Every story comes with a novel's worth of heft and insight. This is such a beautiful book. Don't miss it.

One of “the best writers of our time” (Ann Patchett) offers this hilarious yet haunting cycle of stories—all previously uncollected.

Since the explosive publication of Oldest Living Confederate Widow Tells All, Allan Gurganus has dazzled readers as “the most technically gifted and morally responsive writer of his generation” (John Cheever). He has been praised as "one of America’s preeminent novelists, our prime conductor of electric sentences" (William Giraldi). Above all, Allan Gurganus is a seriously funny writer, an expert at evoking humor, especially in our troubled times.

Now he offers nine classic tales—never before between covers. They attest to his mastery of the short story and the growing depth of his genius.? Offering characters antic and tragic, Gurganus charts the human condition—masked and unmasked—as we live it now. “Once upon a time” collides with the everyday. We meet a mortician whose dedication to his departed clients exceeds all legal limits. We encounter a seaside couple fighting to save their family dog from Maine’s fierce undertow. A virginal seventy-eight-year-old grammar school librarian has her sole erotic experience with a polyamorous snake farmer. A vicious tornado sends twin boys aloft, leaving only one of them alive. And, in an eerily prescient story, cholera strikes a rural village in 1849 and citizens come to blame their doomed young doctor who saved hundreds.

These meticulously crafted parables recall William Faulkner’s scope and Flannery O’Connor’s corrosive wit. Imbuing each story with charged drama, Gurganus, a sublime ventriloquist, again proves himself among our funniest writers and our wisest.

Allan Gurganus is widely translated, a Guggenheim Fellow, and a member of the American Academy of Arts and Letters. Adaptations of his fiction have earned four Emmys, and his stories have been appearing in The New Yorker since 1974. He lives in a small town in North Carolina.

His first book since 2013, and it’s more than worth the wait. The collection is Gurganus at his finest: funny, compassionate, and marked by the author’s amazing ability to reflect the lightness—and darkness—in the souls of his fascinating characters.... This is a remarkable book, and it proves once again why Gurganus is one of the country’s most talented and imaginative writers. Coming after a year where nothing went right, and the world was forced to realize that things might not work out in the end, it’s a hopeful tonic.
— Michael Schaub - NPR

[A] rollicking collection… The author is by turns plaintive and picaresque. His narrators urgently want to say their piece, perhaps because they’re underdogs, used to being misunderstood, dismissed or ignored.
— Vanessa Hua - New York Times Book Review

[Gurganus] is a master of voice, a born storyteller with a gift for balancing the darkness and the tenderness of the human heart in his fiction.
— Colette Bancroft - Tampa Bay Times

Gurganus’s vital collection (after Local Souls) portrays small-town Americans, mostly oddballs and misfits, at moments of self-discovery as recounted in their own authentic voices. Several stories take place in fictional Falls, N.C., once called “the Athens of This Far into Eastern North Carolina,” according to the tour guide in “The Deluxe $19.95 Walking Tour of Historic Falls (NC)....” Among the greatest entries in this stellar work are “My Heart Is a Snake Farm,” featuring a spinster whose life in a crumbling Florida motel brightens when a slippery charmer opens a reptile tourist attraction, and “He’s at the Office,” which details a son’s efforts to help his 80-year-old father, a WWII veteran mentally stuck in the 1940s. Simultaneously funny and compassionate, literary and lowbrow, Gurganus’s stories trawl the mysteries of the human heart and surface with wonderful results.

These nine stories provide a masterclass in How to Write a Story. I’m not sure how Mr. Gurganus can offer Comical, Tragic, Tender, Frightening, Soulful, Hopeful, and Despairing elements within every story, but it’s true. Perfect protagonists and their enemies. What the heck took so long for these remarkable uncollected stories to discover a binding? This collection deserves to be on the same shelf as Carver, Cheever, and O’Connor.
— George Singleton, author of You Want More: Selected Stories

Gurganus, a storyteller in the grand tradition. . . can tell his stories as well as anyone alive in our time.
— George Garrett - New York Times Book Review

Allan Gurganus has the uncanny ability to make you laugh and shudder at the same time.
— T.C. Boyle

Allan Gurganus is our verbal magician. He turns factual rabbits into poetic doves. Every sentence contains a surprise, but the brilliant surface doesn’t dazzle us from peering into the tender human depths.
— Edmund White

No living writer knows more about how humans matter to each other.
— Wells Tower