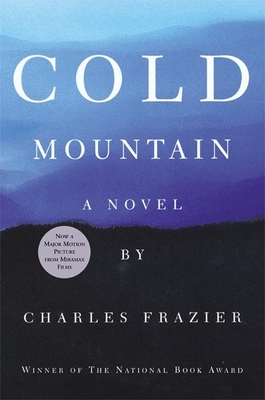 By Charles Frazier
$19.95
Availability to be confirmed

Cold Mountain is an extraordinary novel about a soldier's perilous journey back to his beloved at the end of the Civil War. At once a magnificent love story and a harrowing account of one man's long walk home, Cold Mountain introduces a stunning new talent in American literature. Based on local history and family stories passed down by the author's great-great-grandfather, Cold Mountain is the tale of a wounded soldier, Inman, who walks away from the ravages of the war and back home to his prewar sweetheart, Ada. Inman's odyssey through the devastated landscape of the soon-to-be-defeated South interweaves with Ada's struggle to revive her father's farm, with the help of an intrepid young drifter named Ruby. As their long-separated lives begin to converge at the close of the war, Inman and Ada confront the vastly transformed world they've been delivered. Charles Frazier reveals marked insight into man's relationship to the land and the dangers of solitude. He also shares with the great nineteenth century novelists a keen observation of a society undergoing change. Cold Mountain re-creates a world gone by that speaks eloquently to our time.

Charles Frazier has taken on a daunting taskand has done extraordinarily well by it a Whitmanesque foray into America: into its hugeness, its freshness, its scope and its soul.” James Polk, The New York Times Book Review

Charles Frazier’s feeling for the Southern landscape is reverential and beautifully composed. He has written an astonishing first novel.” Alfred Kazin, The New York Review of Books

An astonishing debut . . . The genuinely romantic saga of Ada and Inman is a page turner that attains the status of literature.” Malcolm Jones, Newsweek

Strikingly beautiful . . . In its vivid evocation of a time and place, its steady storytelling momentum, and its unabashed affirmation of a fiction that takes moral choice seriously, Cold Mountain calls to mind Snow Falling on Cedars.” Newsday

As close to a masterpiece as American writing is going to come these days.” Fred Chappell, Raleigh News & Observer

This novel’s landscape is finely drawn, full of dark beauty and presentiment, and so are its characters.” The New Yorker

Measured and graceful . . . savor it. You’ll find the characters living in your head for a long time.” Milwaukee Journal Sentinel

An exciting work of fiction.” The Washington Post Book World

Deserves all the literary prizes that might be lying about.” Kaye Gibbons

"The novel is above all a sustained flight of the imagination.”Daily Telegraph

Cold Mountain offers compelling glimpses into the surreal horrors of [the Civil War]. . . . Inman’s gripping odyssey alternates with the story of princess-turned-pauper Ada. . . . Civil War buffs, old-time music devotees and love-story suckersthere’s something in this book for everyone” Beth Macy, The Roanoke Times

Frazier’s spare prose is rich in detail and nuance and never misses a beat in evoking the Civil War-era South. . . . Open this book to any page and you will find a description, simile, metaphor or word choice to take you breath away.” Eva Ciabattoni, Los Altos Town Crier

[A] spectacular book. . . . About loneliness and isolation and reaching out.” Ann Klaiman, The Salida Mountain Mail

A remarkable first novel, a romance of love, of friendship, of family, of land. Frazier has inhaled the spirit of the age and breathes it into the reader’s being.”Erica Wager, The Times (London)

Heartbreakingly beautiful . . . elegantly told and convincing down to the last haunting detail.” John Berendt, author of Midnight in the Garden of Good and Evil

A superb novelthrilling, richly detailed and powerful. I was spellbound.” Frank Conroy

This is one of the best books I’ve read in a long time, and I cried when it was over. It’s simply a miracle.” Larry Brown, author of Father and Son

A parallel narrative: Inman is seriously injured at the end of the Civil War and begins a dangerous journey home, and Ada has struggled to learn firsthand how to keep alive on her family farm. A beautifully written love story, with much to discuss.” Robin Powers, St. Helens Book Shop, St. Helens, OR, Book Sense quote

Charles Frazier’s Cold Mountain is the most impressive and enthralling first novel I have read in a long time. It is a magnetic story, ambitious in scope, with richly developed characters and beautiful evocations of landscape. Though set in an earlier time, it is contemporary in the profoundest sense, with resonance of A Farewell to Arms.” Willie Morris

Charles Frazier’s novel is at once spare and eloquent, a panorama that the author stills long enough to make a portraita very evocative portrait of Inman, a soldier who is trying to escape a ruined world. Interspersed with so many moments of sadness, the many moments of compassion seem entirely convincing and are very affecting; when Ada wanted to tell him how she had come to be what she was,’ the understatementas it is so often in Cold Mountainis almost shattering. And then comes the ending.” Ann Beattie

This novel is so magnificentin every conceivable aspect, and others previously unimaginedthat it has occurred to me that the shadow of this book, and the joy I received in reading it, will fall over every other book I ever read. It seems even more possible to never want to read another book, so wonderful is this one. Cold Mountain is one of the great accomplishments in American literature.” Rick Bass