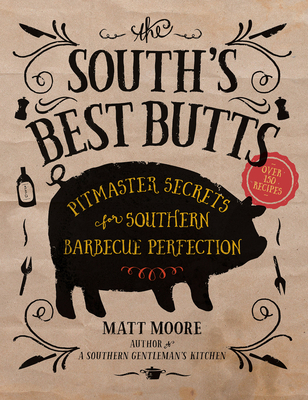 
Special Order - Usually Arrives in 1-5 Days
In The South’s Best Butts, food writer and Southern gentleman, Matt Moore, waves away clouds of smoke to give barbecue-lovers a sneak peek into the kitchens and smokehouses of a handful of the Barbecue Belt’s most revered pitmasters. He uncovers their tried-and-true techniques gleaned over hours, days, and years toiling by fire and spit, coaxing meltingly tender perfection from the humble pig—the foundation of Southern BBQ. More than a book of recipes, Matt explores how the marriage of meat, cooking method, and sauce varies from place to place based on history and culture, climate, available ingredients and wood, and always the closely-guarded, passed-down secrets followed like scripture. Because no meat plate is complete in the South without “all the fixin’s” to round out the meal, Matt cues up patron-sanctioned recipes from every establishment he visits. One thing is for certain…this book will change the way you cook, smoke, grill, and eat, but be warned: Your own butt may suffer in the process.
Matt Moore’ s work has garnered critical acclaim far and wide, from the BBC to The New York Times. Moore’ s narrative style, hosting skills, and recipes have been featured in The Wall Street Journal, Chicago Tribune, Southern Living, and Esquire, as well as on TODAY, VH1, and FOX,  among other outlets. His most recent book was A Southern Gentleman’s Kitchen.