Southern Living Off the Eaten Path: On the Road Again: More Unforgettable Foods and Characters from the South's Back Roads and Byways (Paperback) 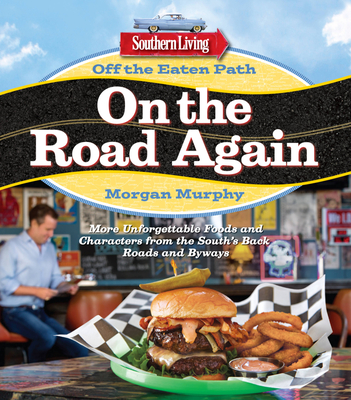 Southern Living Off the Eaten Path: On the Road Again: More Unforgettable Foods and Characters from the South's Back Roads and Byways (Paperback)


Availability to be confirmed
Hidden Southern restaurants and their best recipes await in this, the third helping of Off the Eaten Path. Morgan Murphy takes his hungry readers back on the road with an unforgettable trip across the South, covering 15,000 miles, 60+ all-new restaurants, 150 recipes, in 18 states. From the best fried chicken in Kentucky to a dusty steakhouse in Buffalo Gap, Texas, On the Road Again is a road trip you can take from your own kitchen.This book was researched the old-fashioned way-by pounding the pavement. And after Morgan pried the recipes loose from his favorite restaurants, the Southern Living test kitchen tested and re-tested the recipes to make sure they'll be no-fail favorites at home.
Bestselling author and TV personality Morgan Murphy is often called "America's funniest food critic." His most recent book, Bourbon & Bacon (Time Inc. 2014), immediately hit #1 in wine and spirits and #18 on the cookbook bestseller list. His other books, Off the Eaten Path: Second Helpings (Time Inc., 2013), Off the Eaten Path (Time Inc., 2011), and I Love You--Now Hush (Blair, 2010), have made him one of the culinary world's best-known food critics. Millions have read Murphy's trademark wit in Vanity Fair, Forbes, Esquire, Garden Design, Harper's Bazaar, The New York Post, and Southern Living.
Murphy has appeared on the Travel Channel, The TODAY Show, Fox & Friends, CNN, Sirius/XM, and NPR. He is a graduate of the University of Oxford and Birmingham-Southern College. He serves as a commander in the U.S. Navy Reserves, where he is currently assigned to the Chairman of the Joint Chiefs of Staff. Commander (sel.) Murphy is a veteran of the war in Afghanistan, where he was awarded the Meritorious Defense Service Medal and the Afghan campaign medal, among others.