People Only Die of Love in Movies: Film Writing by Jim Ridley (Hardcover) 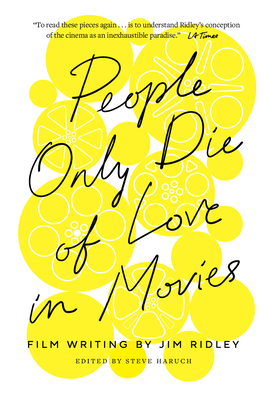 People Only Die of Love in Movies: Film Writing by Jim Ridley (Hardcover)


Special Order - Usually Arrives in 1-5 Days
Popular Culture Association Ray and Pat Browne Award for the Best Reference/Primary Source Work in Popular and American Culture, First Runner-Up, 2019 Combining a cineaste's encyclopedic knowledge of film with a child's sense of wonder, Jim Ridley wrote about movies in a way few others can. He reveled in the joy and mischief of cinema, dwelled on its beauty and violence, and navigated the full breadth of its mythology with clarity and enduring curiosity that earned him the respect of critics around the country. At the time of his unexpected death in 2016, Ridley was editor-in-chief of the alt-weekly Nashville Scene, the paper where his incisive, wide-ranging film reviews won him a devoted readership beginning in 1989. People Only Die of Love in Movies takes its title from a line in the 1964 movie musical The Umbrellas of Cherbourg, the subject of one of Ridley's best-known pieces, included in this volume. In all, the anthology collects nearly one hundred of Ridley's film reviews, essays, and journalistic works, expertly organized by editor Steve Haruch into writing by film genre (e.g., Westerns, the Nouvelle Vague), cinematic theme (e.g., heroes, sexuality), and writing style (e.g., negative reviews, narrative journalism) to demonstrate Ridley's range. People Only Die of Love in Movies invites its readers to revisit favorite films, discover new loves, and immerse themselves in the unparalleled writing of a discerning and knowledgeable critic.
Jim Ridley was a writer and editor at the Nashville Scene for more than twenty-five years, its resident film critic, and most recently the paper's top editor. Under his editorship, the Scene won forty awards from the Association of Alternative Newsmedia, averaging better than five per year. Ridley took home first place in arts criticism twice himself. He also contributed to other publications such as the Village Voice, the Criterion Collection, and Cinema Scope. As a champion of arts cinema, Ridley's advocacy helped save the Belcourt Theatre in Nashville from closure in the early years of the new millennium. Steve Haruch is a writer, editor, and filmmaker based in Nashville. His work has appeared in the Nashville Scene, the New York Times, NPR's Code Switch, the Guardian, and elsewhere. He is currently producing a documentary film about the history of college radio.