Greetings from New Nashville: How a Sleepy Southern Town Became It City (Paperback) 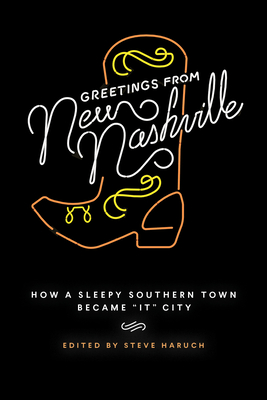 Greetings from New Nashville: How a Sleepy Southern Town Became It City (Paperback)

Steve Haruch’s first edited book was a posthumous collection of the beloved Jim Ridley’s writings. This new collection features essays from some of Nashville's best journalists and authors (like Ann Patchett) writing about the people, places, and issues that make Nashville it is today. I found out so much I didn’t know about the city I love.

— Karen
In 1998, roughly 2 million visitors came to see what there was to see in Nashville. By 2018, that number had ballooned to 15.2 million. In that span of two decades, the boundaries of Nashville did not change. But something did. Or rather, many somethings changed, and kept changing, until many who lived in Nashville began to feel they no longer recognized their own city. And some began to feel it wasn't their own city at all anymore as they were pushed to its fringes by rising housing costs. Between 1998 and 2018, the population of Nashville grew by 150,000. On some level, Nashville has always packaged itself for consumption, but something clicked and suddenly everyone wanted a taste. But why Nashville? Why now? What made all this change possible? This book is an attempt to understand those transformations, or, if not to understand them, exactly, then to at least grapple with the question: What happened?
Steve Haruch is a writer, editor, and filmmaker in Nashville. He is the editor of People Only Die of Love in Movies, also published by Vanderbilt University Press.