Presstime in Paradise: The Life and Times of the Honolulu Advertiser, 1856-1995 (Latitude 20 Books) (Paperback) 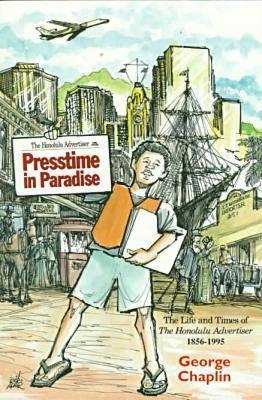 By George Chaplin
$4.99
Availability to be confirmed

Since it first rolled off the presses in 1856, The Honolulu Advertiser has been an important force in reporting and shaping the news of Honolulu and, secondarily, the Hawaiian Islands. Established as The Pacific Commercial Advertiser, a four-page weekly, it was the first enduring non-government owned or subsidized newspaper published in the Hawaiian Kingdom. Under its first owner, the son of New England missionaries, the Advertiser became the most successful commercial English language newspaper in the Islands. The paper became a daily in 1882 and in 1921 changed its name to The Honolulu Advertiser. Now owned by Gannett Company, Inc., the Advertiser is one of the oldest newspapers still operating west of the Rockies.

George Chaplin, editor-in-chief of the Advertiser from 1959 to 1986, has written a colorful and entertaining insider's account of nearly a century and a half of Advertiser history. He covers the legion of personalities that has worked for the Advertiser over the years: owners (from its first Island owner, Henry Whitney, to its last, the Thurston Twigg-Smith family), publishers, editors, reporters, political cartoonists, photographers, and pressroom people. He reports on issues and historical events that had a powerful impact on the Honolulu community and comments on the newspaper's position regarding each: the sensational Massie trial, the dilemma of Hawaii's Americans of Japanese ancestry during World War II, the labor movement and communism in the Islands, and statehood, among others. He also recalls the many political figures who have waged their media battles within the pages of the Advertiser.Presstime in Paradise is an illuminating and informative look at the internal operations of a newspaper and its relationship with a community that has both influenced it and been influenced by it. It adds significantly to the growing body of literature on the role of the free press in Hawaii.