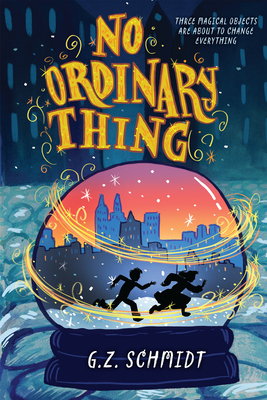 This is a fun time-travel adventure containing a magical snow globe, a boy who lives above a bakery, and a mystery to be solved.

— Rae Ann
An imaginative time travel mystery about a boy whose life is upeneded with the arrival of a stranger and a magical promise.

Twelve-year-old Adam doesn't mind living at his uncle's bakery, the Biscuit Basket, on the Lower East Side in New York City. The warm, delicious smells of freshly baked breads and chocolate croissants make every day feel cozy, even if Adam doesn't have many friends and he misses his long dead parents very much.

When a mysterious but cheerful customer tells Adam that adventures await him, it's too strange to be true. But days later, an unbelievable, incredible thing happens. Adam travels back in time, first to Times Square in 1935, then a candle factory fire in 1967.

But how are these moments related? What do they have to do with his parents' death? And why is a tall man with long eyebrows and a thin mustache following Adam's every move?

In her debut novel G. Z. Schmidt has crafted a world filled with serendipity, mystery, and adventure for readers of Roald Dahl and Lemony Snicket.
G. Z. Schmidt was born in China and immigrated to the United States when she was six. She grew up in the Midwest and the South where she chased fireflies, listened for tornado warnings, and pursued a love of reading. In the third grade, she began writing stories in a spiral-bound notebook, and never looked back. She is the author of No Ordinary Thing and The Dreamweavers, which was named a New York Public Library Best Book of the Year and a CCBC Choice book. She currently lives in California with her husband and their tuxedo cat.
"Resolving mysteries and featuring glimpses into its hero’s future, No Ordinary Thing is no ordinary time travel story; it contains timeless lessons on friendship, bravery, and letting go." —Foreword Reviews

"Schmidt’s complex, tightly constructed middle grade debut explores time travel and fantasies about altering the past for the better. . . . Told in a confident narrative voice, the novel adroitly traces the characters’ and objects’ journeys and connections, encouraging close reading and keen speculation as the suspense builds to a most satisfying conclusion." —Publishers Weekly

"The people Adam encounters and those connected with the three artifacts are all intriguing, and a greedy time thief adds a dangerous element to the last few chapters. . . . Elegant writing and an imaginative conceit."—School Library Journal

"A magical New York journey through time and the grieving process."—Kirkus Reviews