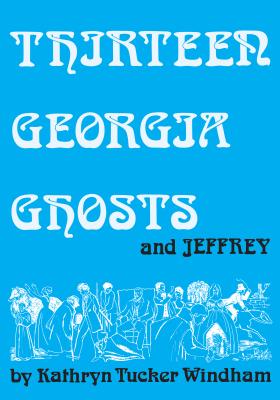 Petrifying the Peach State, hosts of haints have beset the state of Georgia throughout its storied history. In Thirteen Georgia Ghosts and Jeffrey, best-selling folklorist Kathryn Tucker Windham, along with her trusty spectral companion Jeffrey, introduce thirteen of Georgia’s most famous ghost stories.

Windham won hearts across the nation in her regular radio broadcasts and many public appearances. The South’s most prolific raconteur of revenants, Windham, giving new meaning to the phrase “ghost-writer,” does more than tell ghost stories—she captures the true spirit of the place.

Evoking Georgia’s colonial era, “The Eternal Dinner Party” explains why the sounds of an elegant dinner soirée still waft from the grove of Savannah’s Bonaventure estate. At the onset of the Revolution, the Tattnall family abandoned Bonaventure and slipped away to England. Young Josiah Tattnall eventually returned to fight in the Revolution, restored Bonaventure, and later became Georgia’s governor. One holiday eve, when the mansion was bedecked with magnolia and holly and crowded with visitors, a fire too large to control swept through the old house. Tattnall, exhibiting his cool head and impeccable manners, ordered the massive dinner table carried out to the garden where he enjoined his holiday revelers to continue their stately meal. The melancholy strains of Tattnall’s dinner guests still echo through Bonaventure’s ancient oaks on moonlight nights.

In “The Ghost of Andersonville,” Windham takes visitors near the woebegone Confederate prisoner-of-war camp. A plaque there still recounts the tale of Swiss immigrant and Confederate captain Henry Wirz. Convicted—many thought wrongly—of war crimes, Wirz’s restless ghost still perambulates the highways of south Georgia. Writing for the Georgia Historical Commission, Miss Bessie Lewis quips in her preface to this beloved collection, “Who should be better able to tell of happenings long past than the ghosts of those who had a part in them?”

A perennial favorite, this commemorative edition restores Thirteen Georgia Ghosts and Jeffrey to the ghastly grandeur of its original 1973 edition.

Kathryn Tucker Windham grew up in Thomasville, Alabama, the youngest child in a large family of storytellers. For many years a Selma resident, Windham was a freelance writer, collected folklore, and photographed the changing scenes of her native South. A nationally recognized storyteller and a regular fixture on Alabama Public Radio, her commentaries were also featured on National Public Radio’s “All Things Considered.” Her other books include Thirteen Alabama Ghosts and Jeffrey, Jeffrey Introduces Thirteen More Southern Ghosts, Jeffrey’s Latest Thirteen, Thirteen Mississippi Ghosts and Jeffrey, and Thirteen Tennessee Ghosts and Jeffrey.

“Ghost stories have a very real place in the folklore and the history of a state or a nation. After all, who should be better able to tell of happenings long past than the ghosts of those who had a part in them?”
—Miss Bessie Lewis, author of They Called Their Town Darien: Being a Short History of Darien and McIntosh County, Georgia

“Spine-tingling with a twang . . .”
—National Public Radio’s “All Things Considered”

“In Windham’s tales . . . myth and fact intertwine to present a picture of the South that is as true as any textbook.”
—Paris Review