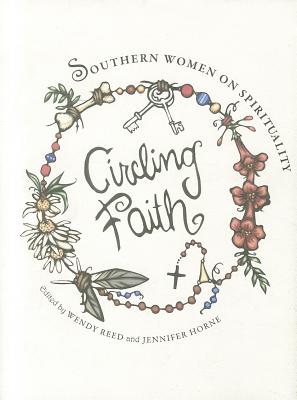 
Availability to be confirmed
Circling Faith is a collection of essays by southern women that encompasses spirituality and the experience of winding through the religiously charged environment of the American South.
Mary Karr, in “Facing Altars,” describes how the consolation she found in poetry directed her to a similar solace in prayer. In “Chiaroscuro: Shimmer and Shadow,” Susan Cushman recounts how her dissatisfaction with a Presbyterian upbringing led her to hold her own worship services at home and eventually to join the Eastern Orthodox Church. “Magic” by Amy Blackmarr depicts a religious practice that occurs wholly outside of any formal setting—she recognizes places, such as a fishing shack in south Georgia, and things, such as crystal Cherokee earrings, as reminders that God exists everywhere and that a Great Comforter is always present. In “The Only Jews in Town,” Stella Suberman gives her account of growing up as a religious minority in Tennessee, connecting her story to a larger narrative of Eastern European Jews who moved away from the Northeast, often to found and run “Jew stores” in midwestern and southern towns.  Alice Walker, in an interview with Valerie Reiss titled “Alice Walker Calls God ‘Mama,’” relates her dynamic relationship with her God, which includes meditation and yoga, and explains how she views the role of faith in her work, including her novel The Color Purple.  These essays showcase the large spectrum of spirituality that abides in the South, as well as the equally large spectrum of individual women who hold these faiths.
Wendy Reed writes, produces, and directs at The University of Alabama Center for Public Television and Radio. She has received two Regional Emmys for her work with Discovering Alabama and also directs and produces the series Bookmark along with various documentaries. She also teaches in the College of Communication and Information Sciences at The University of Alabama. Reed is coeditor of All Out of Faith: Southern Women on Spirituality. Jennifer Horne is the author of Bottle Tree: Poems and coeditor of All Out of Faith: Southern Women on Spirituality. She currently teaches in The University of Alabama Honors College and serves as poetry book reviews editor for First Draft Reviews Online.
“Circling Faith is a vital, welcome, eclectic, and ecumenical collection, and an important addition to contemporary works exploring spirituality.  To students of southern culture, women’s studies, and contemporary American divinity and religious studies, this book will prove to be a valuable resource.”—Melissa J. Delbridge, author of Family Bible

"This new anthology, edited by writer-producer Reed and poet Horne, exemplifies some of the best of the multiplicity of voices with something to say. Its core idea is distinctive: writings on religion and spirituality by women of the American South. There are some big names here—an interview with Alice Walker and a touching essay by Mary Karr. Susan Cushman also discusses Presbyterianism and Eastern Orthodoxy, and Brenda Osbey writes of everything she can’t tell you about New Orleans and its voodoo. VERDICT An excellent counterpart to the “Best Spiritual Writing” series, this varied volume will appeal to literary, feminist, and spiritual readers in public and academic libraries."--Library Journal