Through Mobility We Conquer: The Mechanization of U.S. Cavalry (Hardcover) 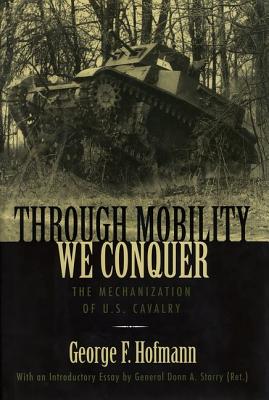 The U.S. Cavalry, which began in the nineteenth century as little more than a mounted reconnaissance and harrying force, underwent intense growing pains with the rapid technological developments of the twentieth century. From its tentative beginnings during World War I, the eventual conversion of the traditional horse cavalry to a mechanized branch is arguably one of the greatest military transformations in history. Through Mobility We Conquer recounts the evolution and development of the U.S. Army's modern mechanized cavalry and the doctrine necessary to use it effectively. The book also explores the debates over how best to use cavalry and how these discussions evolved during the first half of the century. During World War I, the first cavalry theorist proposed combining arms coordination with a mechanized force as an answer to the stalemate on the Western Front. Hofmann brings the story through the next fifty years, when a new breed of cavalrymen became cold war warriors as the U.S. Constabulary was established as an occupation security-police force. Having reviewed thousands of official records and manuals, military journals, personal papers, memoirs, and oral histories -- many of which were only recently declassified -- George F. Hofmann now presents a detailed study of the doctrine, equipment, structure, organization, tactics, and strategy of U.S. mechanized cavalry during the changing international dynamics of the first half of the twentieth century. Illustrated with dozens of photographs, maps, and charts, Through Mobility We Conquer examines how technology revolutionized U.S. forces in the twentieth century and demonstrates how perhaps no other branch of the military underwent greater changes during this time than the cavalry.