In Europe's Shadow: Two Cold Wars and a Thirty-Year Journey Through Romania and Beyond (Paperback) 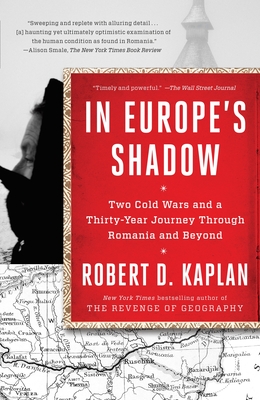 By Robert D. Kaplan
$18.00
Availability to be confirmed

From the New York Times bestselling author Robert D. Kaplan, named one of the world’s Top 100 Global Thinkers by Foreign Policy magazine, comes a riveting journey through one of Europe’s frontier countries—and a potent examination of the forces that will determine Europe’s fate in the postmodern age.

Robert Kaplan first visited Romania in the 1970s, when he was a young journalist and the country was a bleak Communist backwater. It was one of the darkest corners of Europe, but few Westerners were paying attention. What ensued was a lifelong obsession with a critical, often overlooked country—a country that, today, is key to understanding the current threat that Russia poses to Europe. In Europe’s Shadow is a vivid blend of memoir, travelogue, journalism, and history, a masterly work thirty years in the making—the story of a journalist coming of age, and a country struggling to do the same. Through the lens of one country, Kaplan examines larger questions of geography, imperialism, the role of fate in international relations, the Cold War, the Holocaust, and more.

Here Kaplan illuminates the fusion of the Latin West and the Greek East that created Romania, the country that gave rise to Ion Antonescu, Hitler’s chief foreign accomplice during World War II, and the country that was home to the most brutal strain of Communism under Nicolae Ceaușescu. Romania past and present are rendered in cinematic prose: the ashen faces of citizens waiting in bread lines in Cold War–era Bucharest; the Bărăgan Steppe, laid bare by centuries of foreign invasion; the grim labor camps of the Black Sea Canal; the majestic Gothic church spires of Transylvania and Maramureş. Kaplan finds himself in dialogue with the great thinkers of the past, and with the Romanians of today, the philosophers, priests, and politicians—those who struggle to keep the flame of humanism alive in the era of a resurgent Russia.

Upon his return to Romania in 2013 and 2014, Kaplan found the country transformed yet again—now a traveler’s destination shaped by Western tastes, yet still emerging from the long shadows of Hitler and Stalin. In Europe’s Shadow is the story of an ideological and geographic frontier—and the book you must read in order to truly understand the crisis Europe faces, from Russia and from within.

Praise for In Europe’s Shadow

“[A] haunting yet ultimately optimistic examination of the human condition as found in Romania . . . Kaplan’s account of the centuries leading up to the most turbulent of all—the twentieth—is both sweeping and replete with alluring detail.”—Alison Smale, The New York Times Book Review

“This book reveals the confident, poetical Kaplan . . . but also a reflective, political Kaplan, seeking at times to submerge his gift for romantic generalization in respectful attention to the ideas of others.”—Timothy Snyder, The Washington Post

“Kaplan is one of America’s foremost writers on the region. . . . In a series of deep dives into the region’s past—Byzantine, Ottoman, Habsburg and Soviet—he finds parallels and echoes that help us understand the present.”—The Wall Street Journal

“Kaplan moves seamlessly from sights, sounds, and conversations to the resonance of history.”—Foreign Affairs

Robert D. Kaplan is the bestselling author of nineteen books on foreign affairs and travel translated into many languages, including The Good American, The Revenge of Geography Asia’s Cauldron, Monsoon, The Coming Anarchy, and Balkan Ghosts. He holds the Robert Strausz-Hupe Chair in Geopolitics at the Foreign Policy Research Institute. For three decades he reported on foreign affairs for The Atlantic. He was a member of the Pentagon’s Defense Policy Board and the Chief of Naval Operations Executive Panel. Foreign Policy magazine twice named him one of the world’s Top 100 Global Thinkers.

“[A] haunting yet ultimately optimistic examination of the human condition as found in Romania . . . The author delves into the ancient roots of Romania’s culture and religion. . . . [Robert D.] Kaplan’s account of the centuries leading up to the most turbulent of all—the twentieth—is both sweeping and replete with alluring detail. . . . The rich characters who wander through these pages . . . dispense wisdom from book-lined homes, cafes, or chapels old and new. . . . Kaplan’s Romania offers lessons on the value of malleability, and what ­endures.”—Alison Smale, The New York Times Book Review

“This book reveals the confident, poetical Kaplan . . . but also a reflective, political Kaplan, seeking at times to submerge his gift for romantic generalization in respectful attention to the ideas of others. That tension—between an aesthetic sense of wholeness and the intellectual acceptance of complexity—is the real subject of the book, both as autobiography and as geopolitics.”—Timothy Snyder, The Washington Post

“A serious yet impassioned survey of Romania . . . [Kaplan’s] method is that of a foreign correspondent, firing off dispatches from the South China Sea to North Yemen to the darkest corners of Eastern Europe when it was still Iron Curtain country, and his approach has a Thucydidean texture: a gimlet-eyed realism as gathered by evidence, and guided by an understanding that the knee-jerk of history is self-interest. . . . Kaplan is a regional geographer par excellence—undeniably, whatever you think of his conclusions—a big-picture man.”—The Christian Science Monitor

“Kaplan is one of America’s foremost writers on the region. . . . In a series of deep dives into the region’s past—Byzantine, Ottoman, Habsburg and Soviet—he finds parallels and echoes that help us understand the present.”—The Wall Street Journal

“Kaplan moves seamlessly from sights, sounds, and conversations to the resonance of history. . . . In Kaplan’s hands, Romania emerges as no mere footnote, but as a historical and political pivot.”—Foreign Affairs

“Kaplan’s work exemplifies rare intellectual, moral and political engagement with the political order—and disorder—of our world. . . . Kaplan’s writing is like the places he visits. It’s a terrain, a concentrated expression of a particular part of the world as he sees it. . . . In Europe’s Shadow amounts to a kind of historical anthropology plus geopolitics, a deep study of a particular country and people. . . . It shows how, at one and the same time, Romania is distinctive and a key to a broader and deeper understanding of contemporary Europe.”—The Huffington Post

“Kaplan’s is travel writing at its contemporary finest, weaving in the sights and sounds of a faraway land alongside interviews with its philosophers and politicians. . . . [In Europe’s Shadow] provides an incisive, tactile introduction to the politics and potential prospects of Central and Southeastern Europe—a region that finds itself once again caught in the headwinds of history.”—RealClearWorld

“A masterly work of important history, analysis, and prophecy about the ancient and modern rise of Romania as a roundabout between Russia and Europe . . . I learned something new on every page. Robert D. Kaplan is a master.”—Tom Brokaw

“A tour de force of cultural and political travel writing in which Romania’s complex past and uncertain present become vivid and newly urgent.”—Colin Thubron, author of Shadow of the Silk Road and co-editor of Patrick Leigh Fermor’s The Broken Road

“Robert D. Kaplan has the remarkable ability to see over the geopolitical horizon, and he now turns his attention to Europe’s marchlands—the former ‘Greater Romania’ lying between the Balkans and a resurgent Russia. In a triple journey through books, landscapes, and histories, he tackles the meaning of geography, the influence of intellectuals, and the daffiness—and power—of nationalism. . . . Timely, insightful, and deeply honest.”—Charles King, professor of international affairs, Georgetown University, and author of Midnight at the Pera Palace: The Birth of Modern Istanbul

“For an appreciation of contemporary Romanian attitudes, Robert Kaplan’s book has no equal. As an outsider, yet within, the author offers an analysis of Romania that combines erudition and authority. His sparkling, suggestive reflections, drawing upon history and landscape, capture the DNA of the country and its inhabitants.”—Dennis Deletant, Ion Rațiu Visiting Professor of Romanian Studies, Georgetown University, and emeritus professor, University College London

“A moving book—an illuminating and compassionate guide through the labyrinth of Romania’s immensely convoluted and often traumatic past . . . In spite of the many dark, distressing moments that no one should ignore, In Europe’s Shadow conveys a sense of hope, promise, and continuous renewal.”—Vladimir Tismăneanu, professor of politics, University of Maryland, and author of The Devil in History: Communism, Fascism, and Some Lessons of the Twentieth Century

“Kaplan illuminates the extraordinary journey of the people of Romania, as well as millions of other East Europeans, from the tragic Soviet despotism of the decades after the Second World War to their more hopeful and democratic future as members of NATO and the European Union. Kaplan’s ability to weave together complex histories, religion, memory, and political thought is nearly unmatched.”—Nicholas Burns, professor, Harvard Kennedy School, and former undersecretary of state for political affairs

“A favorite of mine for years, Robert D. Kaplan is a thoughtful and insight-driven historian who writes clear and compelling prose, but what I like most about him is his political sophistication. In Europe’s Shadow makes you look up and think about what’s on the page—a true pleasure for the reader.”—Alan Furst